Refugees on the Greek Island of Samos – Behind the Veneer 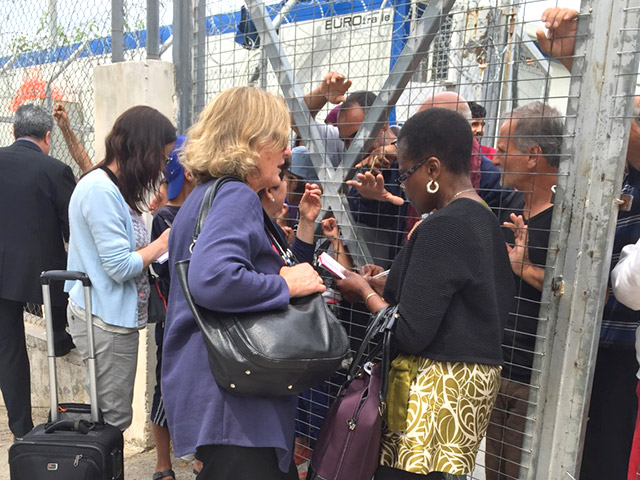 The Greek island of Samos in the eastern Aegean Sea is separated from Turkey by a mile-wide stretch of water called the Mycale Strait. It’s also the arrival point for many refugees fleeing the bloodshed and violence playing out in Syria.

At its peak level, in November 2015, the island was receiving 85,000 refugees a month by boat. On Samos, the government runs a camp where the refugees have been held since the closure of the borders between Turkey, Greece and Macadonia.

Cecilia Taylor-Camara, Senior Policy Adviser to our Office for Migration Policy, joined a delegation of twelve women from churches and charities across Britain and Ireland on a five-day visit to refugee hotspots in Greece (from 23 – 27 May 2016).

On Tuesday 24 May, the group witnessed the opening of a new part of the existing refugee camp. It was built to house 600 – 800 people but was filled on its first day with over 1,000 people.

While the delegation couldn’t enter the ‘registration centre’ as it’s called, they talked to people through the fence and met those on their way in and out of the gates.

While Cecilia Taylor-Camara was impressed with the cleanliness of the facility she was concerned by what she saw and heard behind the veneer.

“There was a lot of uncertainty – mixed motivations for being there and what they were looking forward to. They looked very anxious, even bored, many were uncertain how long they would be there.”

She said it was clear the strain was already showing on the refugees – even on those who had been on Samos for less than two months.

“A lot of people complained about the lack of access to medical facilities. A woman who looked visibly troubled said that she’d been told that she had to wait two months to be given an appointment – I found that very troubling.”

Whilst those in the centre could leave and re-enter at will, access through the gates was strictly controlled.

“People were in this facility – it’s called a registration and identification centre – but for me it is nothing short of a detention camp because they were behind the barbed wire.”

Cecilia reflected on Greece and the island of Samos.

“Greece has gone through the structural adjustment programme and the economic challenges they are facing. Yet they’re so hospitable. Look at the warmth and how welcoming the people of Samos are.

“The island has a population of 35,000 and at the peak of the season in November they had nearly 87,000 refugees arrive. That’s a remarkable generosity of spirit that they have that is lacking in other parts of the world.”

Christine Elliott, director of world church programmes at Churches Together in Britain and Ireland (CTBI), hosted a five-minute conversation with Cecilia Taylor-Camara. Listen below.

focusonrefugees.org
Cecilia Taylor-Camara has written an article on her visit to Greece at the end of May.

ctbi.org.uk
Official website for Churches Together in Britain and Ireland (CTBI)