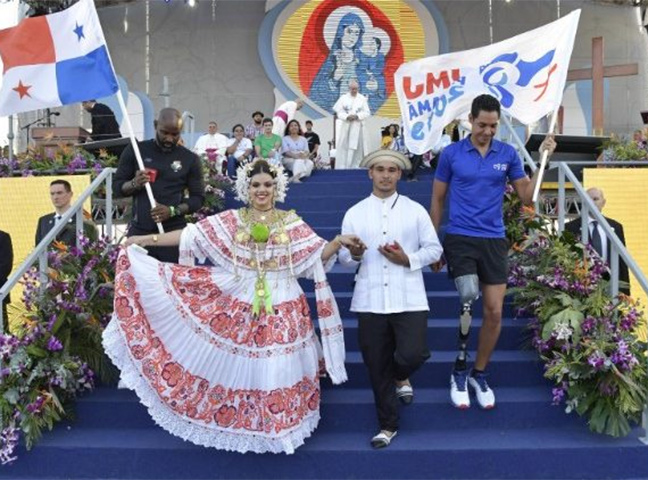 The party began at dawn. As the sun rose over the Panama Canal, colourful groups of flag-waving, singing, swinging, World Youth Day pilgrims were already on the march. Their destination: the 2.5km-long Coastal Beltway, called the Cinta Costera, that flanks the Pacific Ocean on one side, and the Panama City skyline on the other.

The scenic beauty of the location, its easy accessibility and size, made it the perfect choice to host the Welcoming Ceremony and Official Opening of the 34th World Youth Day. Throughout the day, pilgrims were animated and entertained by music, song and dance. So by the time Pope Francis arrived, driven through the crowd in his white popemobile, everyone was, as they say in the trade, thoroughly warmed up and rearing to go.

Then it was the young peoples’ turn to listen to the Pope. “Peter and the Church walk with you”, he began. “We want to tell you not to be afraid, to go forward with the same fresh energy and restlessness that helps make us happier and more available…not to create a parallel Church that would be more ‘fun’ and ‘cool’ thanks to a fancy youth event”.

Pope Francis acknowledged the sacrifices faced by many of the young people in getting here. But, he reminded them, “a disciple is not merely someone who arrives at a certain place, but one who sets out decisively, who is not afraid to take risks and keeps walking”. “This is the great joy”, the Pope insisted, “to keep walking”.

As thousands of young people applauded with approval and shouted aloud in agreement, Pope Francis reminded them how “the culture of encounter is a call inviting us to dare to keep alive a shared dream… A dream that has a place for everyone… A dream named Jesus”. St Oscar Romero provided the inspiration for the Pope when he quoted from a homily of the martyred Archbishop of San Salvador: “Christianity is not a collection of truths to be believed, of rules to be followed, or of prohibitions…Christianity means pursuing the dream for which Jesus gave His life: loving with the same love with which He loved us”.

A love that makes sense

The final part of the Pope’s reflections with the youth people gathered in Panama City on Thursday evening, was dedicated to a definition of love: “A love that does not overwhelm or oppress, cast aside or reduce to silence, humiliate or domineer”. The love of the Lord, he said, “is a daily, discreet and respectful love, one that is free and freeing, a love that heals and raises up. It is the quiet love of a hand outstretched to serve, a commitment that draws no attention to itself”. This, said Pope Francis, is “a love that makes sense”.

The first encounter between the Pope and the young people of World Youth Day in Panama concluded with them repeating, together with him: “Lord, teach me to love you as you have loved us”.

A perfect prayer to end a perfect day.