Pope Francis tells over 3m young Catholics “Go, do not be afraid, and serve” 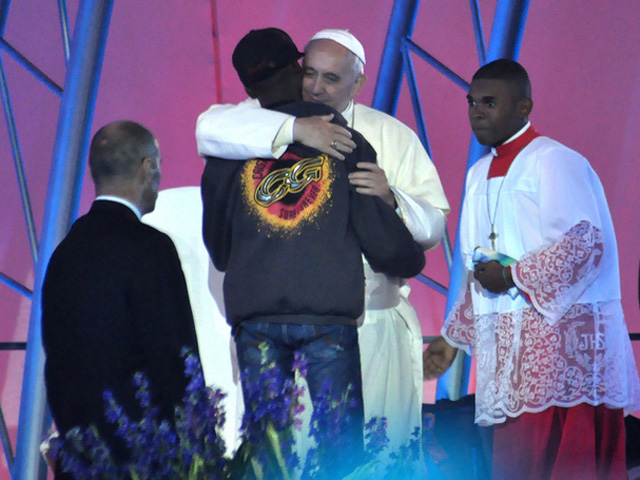 Addressing over three million young pilgrims in what is said to have been the biggest live event ever held in Rio de Janeiro, Pope Francis offered three simple ideas in his final World Youth Day homily.

“Go, do not be afraid, and serve” said Pope Francis – echoing God’s words to Jeremiah. The Holy Father called on the young Catholics and the priests accompanying them to take the Gospel message away from the excitement of World Youth Day and to proclaim the Lord’s word:

“The Church needs you, your enthusiasm, your creativity and the joy that is so characteristic of you. A great Apostle of Brazil, Blessed José de Anchieta, set off on the mission when he was only nineteen years old. Do you know what the best tool is for evangelizing the young? Another young person. This is the path to follow!”

Concluding his homily, Pope Francis said he was counting on the young Catholics to ‘make disciples of all nations’ – the very theme of World Youth Day, Rio:

“Bringing the Gospel is bringing God’s power to pluck up and break down evil and violence, to destroy and overthrow the barriers of selfishness, intolerance and hatred, so as to build a new world.”

Earlier, before reciting the Angelus prayer, the Holy Father announced the next destination for World Youth Day. In 2016, Krakòw, Poland’s second largest city, will host the event.

You can read/download the full text of Pope Francis’ homily by using the link in the top right-hand corner of this article.

For those young people who couldn’t make it to Rio, there were two ‘WYD @ home’ events. One event was held in the north and one in the south. The ‘Rio comes to Kent’ Brightlights festival took place at Aylesford Priory and ‘Rio’s coming to Castlerigg’ was celebrated in Keswick, Cumbria.