Pastoral care of the Armed Forces is not an optional extra, says Forces Bishop 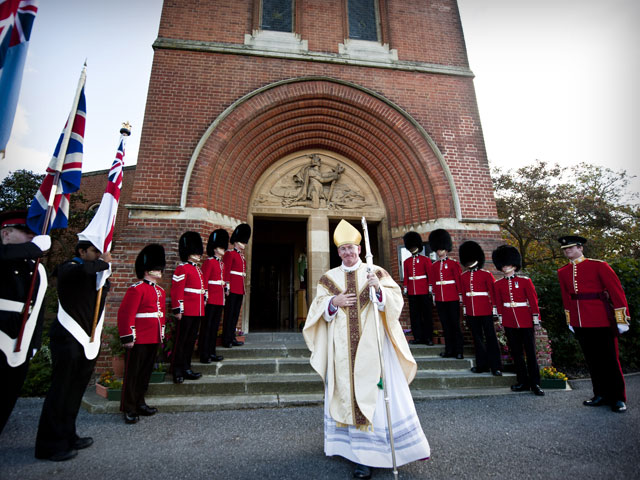 Church » Forces » » Pastoral care of the Armed Forces i...

At a Mass to Celebrate the Silver Jubilee of the Military Ordinariate of Great Britain, the Catholic Bishop of the Forces, Bishop Richard Moth said that at a time of change for the Armed Forces of the United Kingdom “the continuing pastoral care of the Armed Forces community is not an optional extra”.

Care of ‘those who are called to be servants of the security and freedom of nations’ is a ‘vital element’, the Bishop emphasised in his Jubilee homily. It contributed ‘to the common good of the nations and the maintenance of peace’. At a time when there is a real shortage of military chaplains in all three Armed Services, the bishop highlighted the acute need for more chaplains and further resources to ensure this vital mission.

In this ‘Year of Faith’, Bishop Moth gave thanks for the work of chaplains as they accompany Armed Services personnel and their families in their journey of faith:

“Our chaplains hold a very special place in encouraging that journey and we give very special thanks today for all that chaplains have done and continue to do in their vital ministry.”

He also ‘recognised’ and ‘rejoiced’ in the many examples of faith shown by Armed Forces Personnel and their families.

“It is a faith that is lived out in difficult and trying circumstances. This faith may not be expressed in theological language, but it is real, humble, honest, hope-filled and expressed in the most practical of terms.”

He particularly asked for prayers for all those who experience conflict and the pressures of military life – “may they experience the consolation, strength and sense of purpose that is engendered through faith”.

Chaplains and people from across the Bishopric gathered at the Cathedral Church of St. Michael & St. George, Aldershot on Saturday 29 September to mark the Silver Jubilee of the Military Ordinariate of Great Britain. The Military Ordinariate is defined by people rather than by territory. It exists wherever Armed Forces personnel of the Royal Navy, Army and Royal Air Force are on operations or are resident.

Twenty bishops from England, Wales and Scotland concelebrated Mass with Bishop Richard Moth and all the chaplains of the Bishopric not on operations, together with a number of officiating chaplains and local clergy.

The High Sheriff of Hampshire attended, alongside leading military figures, including representatives of the other Christian churches from across the three Armed Services.

The Central Band of the Royal Air Force joined the Cathedral choir and organist in providing music. The 1st Battalion, Irish Guards, provided a Guard of Honour on the steps of the Cathedral. The White Ensign, the Union Flag and the RAF Ensign were presented at the beginning of Mass. Serving personnel from the Royal Navy served as ushers for the Mass. The Garrison Commander, Col. Mike Russell L/RALC read the first reading and representatives of the three Armed Services brought up the offertory.

The Jubilee Mass was followed by a curry lunch, hosted by the Commanding Officer, 1st Battalion, Irish Guards.

You can download both Bishop Moth’s homily and the Holy Father’s message marking the occasion from the top right-hand corner of the page.

rcbishopricforces.org.uk
Official website for the Catholic Bishopric of the Forces

cbcew.org.uk/bishopric-of-the-forces
A section on the Bishops’ Conference site

flickr.com/catholicism
View a set of images on our Flickr Photostream

Following the Second Vatican Council and the promulgation of the Code of Canon Law, Blessed John Paul II, with the Apostolic Constitution Spirituali militum curae changed the status of Military Vicariates to that of Military Ordinariates.

Such Military Ordinariates “are juridically comparable to dioceses, are special ecclesiastical districts, governed by proper statutes issued by the Apostolic See”[1] 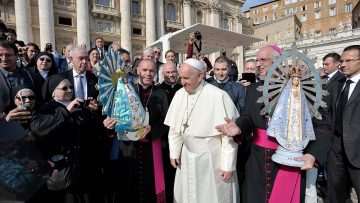