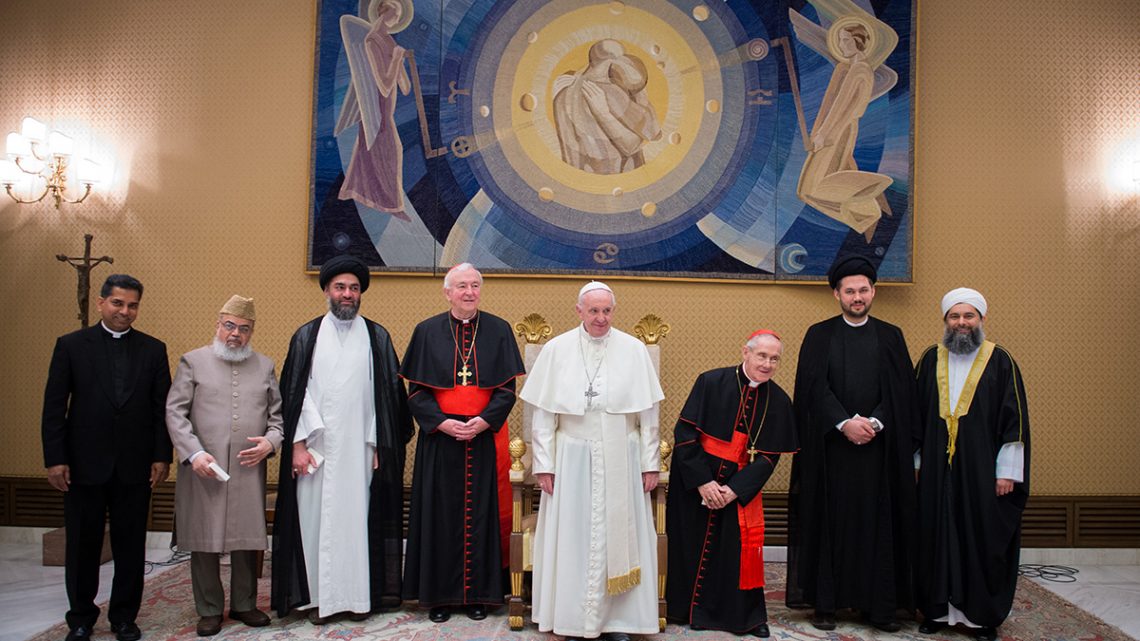 His Holiness Pope Francis today, 5 April, welcomed four UK Muslim leaders who came with Cardinal Vincent Nichols for a private meeting in the Vatican to promote dialogue and close collaboration on social action in the United Kingdom.

Pope Francis told the delegation that listening to each other was essential for the common future of humanity as we walk together in our shared lives. This ability to be attentive and to listen to each other is vital as we all seek a future together united in mercy and peace.

The delegation was led by Cardinal Nichols and made up of Moulana Muhammad Shahid Raza, Moulana Ali Raza Rizvi, Moulana Sayed Ali Abbas Razawi and Shaykh Ibrahim Mogra. Cardinal Nichols has engaged in dialogue with a number of Muslim leaders over the past few years and brought the delegation to Rome for the Papal Audience and meetings with Cardinal Tauran at the Pontifical Council for Inter-religious Dialogue.

“We are deeply moved to meet Pope Francis and we draw great inspiration from his leadership and his encouragement to walk together on the road of profound spiritual dialogue. I also hope that this moment will help the voice of authentic Islam to be heard clearly. We look forward to our continuing promotion of collaboration at a local level at the service of all in society.”

“This is a historic moment when the two biggest religions in the world, Christians and Muslims, must come together in unity and solidarity for peace.”

“I was deeply moved by the audience with Pope Francis. I could see the sincerity and love in his eyes as he offered words of encouragement to all of us as we came together in unity. This is an important meeting offering hope for everyone, regardless of religion. There is a common humanity to all of us. Some seek to divide people, religions, east v west but there is no east or west; there is just our common humanity as we seek a peaceful future for all based on justice and compassion.”

Following the Papal Audience and the meetings in the Pontifical Council, the delegation visited the UK Embassy to the Holy See.

flickr.com
You can view/download images from the meeting on our Flickr photostream.