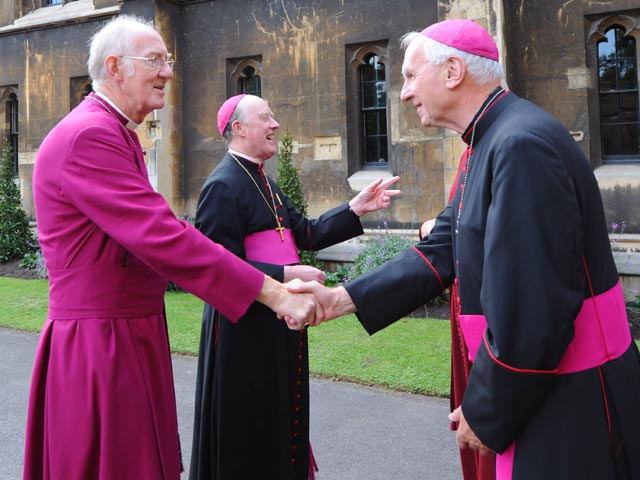 The English group working for unity between Anglicans and Roman Catholics has begun a new stage of its life. Meeting at Canterbury Cathedral from 23-24 March in a context of prayer and worship, the members of the newly configured English Anglican – Roman Catholic Committee – English ARC – started a programme of work for the next five years.

Evangelisation in the context of an increasingly secular society will be a key theme. How our two churches can bear joint witness in the area of public affairs, on issues such as ‘the common good’ as well as other social and ethical questions, will form part of the agenda.

In addition, English ARC will seek to inform members of both churches about ecumenical progress already made over the last 50 years, emphasising what our churches have in common, and encouraging spiritual ecumenism. This involves joint prayer and worship (liturgies of the word). It will also engage with the developing work of the third Anglican – Roman Catholic International Commission (ARCIC III).

English ARC will report to the joint meetings of English Anglican and Roman Catholic bishops, which happen every two years. At the end of its five-year programme, it will produce a report on the work it has undertaken.

English ARC, which was established in 1974, now comprises ten Roman Catholic and ten Anglican members, with the General Secretary of Churches Together in England as an observer. It is chaired by the Archbishop of Birmingham, the Most Revd Bernard Longley, and the Bishop of Truro, the Rt Revd Tim Thornton.

The Archbishop of Birmingham said:

“I look forward to working with the members of English ARC to find new paths towards the unity for which Our Lord prayed.’ The Bishop of Truro said, ‘I am excited by the commitment of English ARC’s new members and the prospect of a programme of work which will make a difference to our churches and their common witness both nationally and at the local level”.