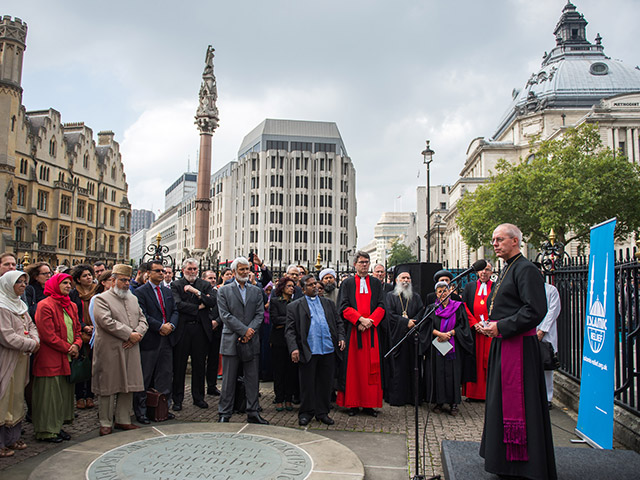 On Wednesday 3 September, an ecumenical gathering took place at Lambeth Palace, hosted by the Most Rev Justin Welby, Archbishop of Canterbury, and initiated by His Grace Bishop Angaelos, General Bishop of the Coptic Orthodox Church in the United Kingdom.

The meeting began with a round table discussion regarding the plight of Christians and minority communities in Iraq, Syria and the wider Middle East.

A statement was then issued, expressing solidarity with, and advocating for, all those who continue to suffer gross violations of the fundamental right and freedom to practice their chosen faith. It was read out by the Archbishop of Canterbury and can be read below.

The round table discussion was followed by a service of prayer to give thanks for Christians in the Middle East and to remember all those who have lost their lives or continue to suffer persecution.

The meeting was followed by an interreligious prayer vigil for peace in the Middle East.

After the meeting, Bishop Angaelos said:

“It is incomprehensible and unacceptable in the 21st Century that our sisters and brothers in the Middle East face intimidation and death for exercising their freedom of religion or belief, or merely being of a certain ethnic background.

“We have gathered today as leaders and representatives of Churches in the Middle East within the wider Church in Britain to stand in solidarity with those who are persecuted for their Christian faith, as well as all who fall victim to injustice.

“We have spoken in one voice, calling for the continued support of Christians and minority groups across the Middle East, and pray protection upon them while they remain steadfast in the face of unimaginable challenges.”

“We are seeing an extreme religious ideology that knows no limits in its persecution of those who are culturally or religiously different. Those who promote this intolerance must be challenged and the perpetrators of violence held to account without impunity. The suffering of those who bear the brunt of its terror requires us to act and bear witness to their plight, whatever ethnic group or religious minority they come from. We must provide relief and safety for those displaced and in fear of their lives, in consultation with our partners in the region. We must also bring pressure to bear on those who can provide security to those affected.”

A statement by Archbishop Louis Raphael Sako, Patriarch of the Chaldean Church, Iraq, was released on 4 September 2014.

“We should not give up in raising our voice against the extremists and work to create a new mentality of living together Shiites, Sunnites, Arabs, Kurds, Turkmens, Christians and yezidis in peace and harmony, therefore we also have to take offensive action at the ideological level with Islamic world to stop the veneer of religious legitimacy and financing and sending militants.

“We urge the Central Iraqi Government and the Regional Government of Kurdistan to spread the culture of openness, diversity, plurality and equal in the face of a culture of extremism, elimination, marginalization and social backwardness along with a weak individual and collective consciousness of its deficiency.”

Archbishop Tomasi to the UN

Archbishop Silvano Tomasi, the Permanent Representative of the Holy See to the United Nations, has called on the international community to take concrete steps to stop the on-going violence and persecution of minorities in northern Iraq, to re-establish a just peace and to protect all vulnerable groups of society.

Speaking on Monday 1 September 2014 at the 22nd Special Session of the UN Human Rights Council, Archbishop Tomasi said “adequate steps must be taken to achieve these goals”.