With hundreds of churches already planning their response to the 2012 Games, country-wide events will help all wishing to make the most of the opportunity.

On Your Marks is the title for eighteen presentations in major centres during May and June. They come from More Than Gold, the agency established by the main denominations to help churches respond to the 2012 Games.

The tour follows a series of vision setting events last year attended by over 1,200 church leaders. The focus this time is on helping churches turn inspiration into local activity.

The content includes a detailed look at how the Torch Relay offers opportunities for churches, the role of Community Festivals and the strategic use of Sports Outreach.

Says David Willson, CEO of More Than Gold, ‘Athletes around the world are in training. The UK public are thinking about which events to attend. And it is time for churches to be making their own plans. This tour gives them the help they need’.

Full information is available at morethangold.org.uk/onyourmarks

The Church of England’s Olympic and Paralympic Executive Co-ordinator, Revd Canon Duncan Green, says, ‘The 2012 Games give churches a unique opportunity to reach out into their communities. With More Than Gold offering a wealth of experience and expertise in events, festivals and sports ministry’.

The Catholic Church’s Executive Coordinator for the 2012 Games, James Parker, says, ‘Churches need to know how they will welcome the stranger, serve others, and be the hands of Christ during the 2012 Games. These events will help churches see how best to engage with this once-in-a-lifetime global event’.

The Baptist Union of Great Britain’s Head of Mission, Rev Ian Bunce, says, ‘More than Gold gives the churches the opportunity to be effective and noticeable by working together in response to the 2012 Games – achieving so much more than the sum of the parts.

The Salvation Army’s More Than Gold Coordinator, Sarah-Jane Alley, says, ‘Every church should come and hear how More Than Gold can help them make the most of this exciting opportunity to share Jesus’ love’.

The Church of God of Prophecy’s coordinator for the 2012 Games, Rudi Page, says, ‘The tour is a great opportunity for Pentecostal churches to understand how they can pass the baton to their local communities by giving their support to caring, peaceful and enterprising neighbourhood initiatives’.

Since the 1996 Atlanta Games the Christian community’s involvement with the world’s major sporting events has been under the banner ‘More Than Gold’. This provides a flag for united faith-based outreach, hospitality and service, and also an interface between the event’s organising committee and the churches

To get ready for the 2012 Games, More Than Gold was established as a charitable trust in 2008 under the chairmanship of Lord Brian Mawhinney. It has the support of all main denominations and over sixty Christian organisations and mission agencies.

The banner ‘More Than Gold’ has been used for the Commonwealth Games, Pan American Games, All-Africa Games, Indian Ocean Games and Summer and Winter Olympic Games and Paralympics.

Peter Meadows
Director of Communication for More Than Gold
peter.meadows@morethangold.org.uk 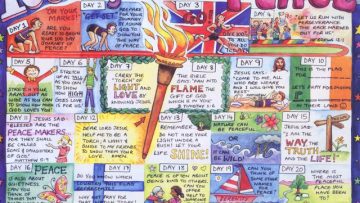 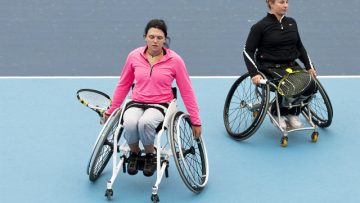 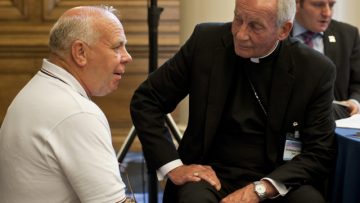 Churches Together Presidents on Olympics

Catholics asked to ‘Ring bells and pray for the Games’