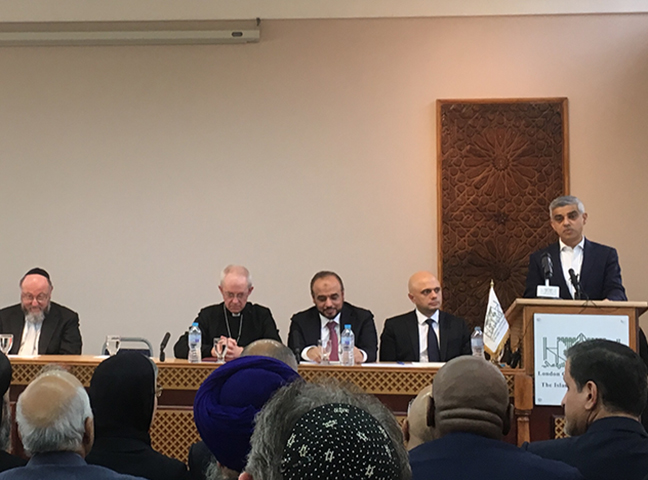 Faith and civic leaders gathered at London Central Mosque this afternoon to show a united front in solidarity with those who suffered the terrorist attack in New Zealand last Friday, 15 March.

Over 50 people were killed in the terrorist attack at two mosques in Christchurch on New Zealand’s south island.

All faiths were represented at the event at the Central London Mosque with speakers including Home Secretary Sajid Javid, Communities Secretary James Brokenshire, London Mayor Sadiq Khan, Chief Rabbi Ephraim Mirvis and Archbishop of Canterbury the Most Reverend Justin Welby. Cardinal Vincent Nichols, who was unable to attend, was represented by Bishop John Wilson, auxiliary bishop in Westminster.

“An attack on one group is an attack on all of us. Noone should feel unsafe when practising their religion,” said Mr Brokenshire.

Chief Rabbi Mirvis said it was important for all to come together to overcome those who seek to divide.

“Let us unite in our rejection of all hate crime and hate speech,” he said.

“Let us unite against those who seek to divide. Let us unit to promote harmony.”

Archbishop Welby said that the response to this monstrous attack by the people in New Zealand had been both beautiful and inspiring. He promised action as well as words through Church of England schools, in parishes and an Episcopal level.

“For Muslims who feel under threat, I say we will be with you,” said Archbishop Welby. You are us and we are you. As my friend Cardinal Nichols has said, faith and a belief in God is part of the solution.”

Bishop John Wilson said that it was important for leaders to come together and show solidarity, echoing the message that hope, love and unity would always trump division, fear and hatred. “It is important that this has to happen at the grassroots. We need to take every opportunity in our parishes to build local links across the faiths and make this support into friendships. Tolerance and coexistence is not enough. We need to build relationships and become friends.”