Christians: Part of the fabric of society in Iraq and Kurdistan 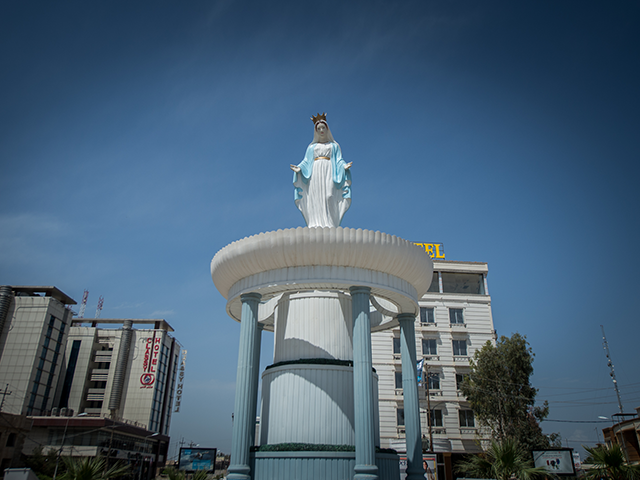 Liam Allmark, Head of Public Affairs at the Catholic Bishops’ Conference of England and Wales, joined a delegation of UK MPs from the All Party Parliamentary Group (APPG) on Kurdistan on a visit to the autonomous region in northern Iraq in May 2018.

Attending as an observer at the invitation of the APPG, Liam has written this report.

Our Bishops do not align themselves to any political party. However, the Catholic community in England and Wales has a strong connection with the Christian community in Iraq and the Kurdistan Region, so it was a welcome opportunity to accompany British MPs on this visit and join in some of their conversations.

Christianity has ancient roots in this part of the world and, despite the enormous challenges their community has faced, Christians continue to play an active role in society today. We met Christian lawmakers in the Kurdistan Parliament; attended a packed Mass in St Joseph’s Chaldean Cathedral; saw the Church’s university and the site of its new hospital; held lively conversations with Christian students, and, of course, shared culinary delights in Ankawa – Erbil’s Christian Quarter.

The Chaldean Archbishop of Erbil, Bashar Warda describes his mission here “to help my people not to survive but to thrive.” We hope that anyone concerned with the future of Iraq and the Kurdistan Region can get behind this vision.

We know all too well how much Iraq’s Christian community has suffered in recent decades because of conflict and political instability. As the leaders of churches in the Kurdistan Region stated last year: “it is possible to say without any doubt that it is the Christians who continue to be the biggest losers in all of these fights, to which they have never been party and which, if continued, would render our people more intent on emigration, leading to their being wiped out from the surface of this land.”

During this visit the delegation received fresh insight into those challenges facing the region’s Christians, around 100,000 of whom fled to Erbil from their homes on the Nineveh Plains, escaping the advance of Daesh in 2014.

Things today are very different to my last visit a few years ago. Half of the Christians who arrived in Erbil as internally displaced persons have returned home and the Church’s last Internally Displaced Persons (IDP) camp is about to close. This is largely due to the phenomenal work of the Nineveh Reconstruction Committee, a collaboration between the Chaldean, Syriac Orthodox, and Syriac Catholic communities, which has so far renovated more than 12,000 homes, with support from the international community.

However there are still tens of thousands of displaced Christians living in the Kurdistan Region who do not know what the future holds. Thousands of homes on the Nineveh Plains, along with vital infrastructure and farmland wrecked by Daesh forces, still need to be restored. The huge costs are even harder to meet against the backdrop of economic difficulties in Iraq.

Without opportunities to return home or rebuild their lives, many Christians will follow the thousands who have left for Europe or America. Iraq’s Christian community has already shrunk exponentially over the past decade. If it continues to do so this will be to the detriment of the whole country.

We hope that going forward the UK will increase its support for reconstruction, job creation, and educational opportunities both in the Kurdistan Region and more widely, which will help give a meaningful future to this community that has experienced so much violence, displacement and destruction of their livelihoods.

Another critical issue is the security of people returning to the Nineveh Plains. During the visit we heard how instability on the Nineveh Plains, exacerbated in the aftermath of the referendum, has slowed down reconstruction and left many people frightened to return. It was also clear that Daesh remains a threat, despite losing control of territory.

When fighting broke out between Iraqi and Kurdish forces following the referendum, leaders of Churches in the Kurdistan Region said: “the Plains of Nineveh should be maintained as a unified territory; it is critical to not divide it into parts. Care should be made not to involve the last remaining Christian land in political bargaining, as our vulnerable community cannot withstand further schism and division in addition to the ongoing political and sectarian fights. The Plain of Nineveh is a great symbol for Christians in Iraq, the Kurdistan Region, and the world.”

As political negotiations continue, we hope that friends of the region including our own politicians will work with both the Kurdistan Regional Government and the Iraqi Government to protect families returning to the Nineveh Plains, safeguard their land rights, and give them a proper stake in decisions about their future.

Above all, it is important that our parliamentarians and government, politicians and diplomats continue to engage with Christians in Iraq and the Kurdistan Region, promoting their position as citizens with essential rights and responsibilities, while also engaging with the local Church in England and Wales which continues to maintain close contacts with the Church across the region.

As Cardinal Vincent Nichols reflected following his own visit, the Christian community is “an integral part of the country’s societal fabric and essential for creating a more stable future. The community’s deep commitment to forgiveness and reconciliation is especially important as Iraq strives to emerge from decades of conflict.”