Catholic Church calls on employers to pay a “Living Wage” 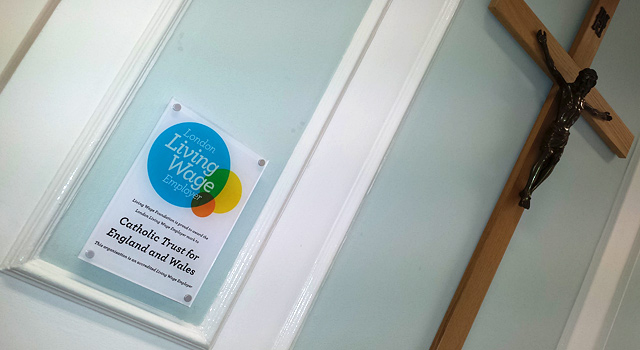 To coincide with Living Wage Week, the Catholic Bishops’ Conference of England and Wales together with three of its leading Catholic Agencies: the Catholic Education Service, CSAN (Caritas Social Action Network) and CAFOD, have reiterated the Church’s teaching on just wages and its support for the Living Wage and its importance for the support of workers’ families.

The Catholic Bishops’ Conference and the Catholic Education Service have produced a Living Wage Resource encouraging Catholic organisations, schools and charities in England and Wales to work towards its implementation.

The Catholic Bishops’ Conference of England and Wales, the Catholic Education Service, CSAN and CAFOD are all accredited Living Wage Employers.

“The Bishops’ Conference fully endorses the principle of the Living Wage and invites Catholic organisations and charities in England and Wales to work towards its implementation.”

“We welcome the Bishops’ invitation to support the Living Wage. The importance of a ‘just wage’ can be found in Catholic Social Teaching, spanning over 100 years.”

“Schools and colleges play a central role in our Catholic communities and we recognise that, though schools often face financial pressure, this is one way in which we can live out our faith in service to the Common Good.”

“Many Catholic Charities are increasingly witnessing more families living in ‘in-work poverty’ and struggling to afford the very basic costs of living such as food, utilities and rent payments. We recognise the importance of just wages as well as fair terms and conditions of employment”

“CSAN is committed to the principle of a Living Wage, which not only enables individuals to provide materially for their families but also allows them to spend quality time with their children”.

“Scripture makes many references to the importance of paying a right and just wage for work done. Although we were already paying the Living Wage for our staff before the joining the campaign, our Facilities Manager was also able to secure a Living Wage for the contract staff who deliver some of the services for CAFOD through third parties. We also feel that it was important to become a Living Wage employer as an expression of our solidarity with the principles of a paying a living wage and with those individuals and organisations striving to achieve fair pay.”

The Catholic Bishops’ Conference of England and Wales, CES, CSAN and CAFOD are all accredited Living Wage Employers.

Caritas Social Action Network is the official domestic social action agency of the Catholic Church in England and Wales and comprises over 40 Catholic Charities, many of whom work closely with children and families living in poverty.

CAFOD is the official overseas development and relief agency of the Catholic Church in England and Wales, working in countries across Africa, Latin America and Asia to support local communities in their fight against poverty and injustice.

The importance of paying a ‘just wage’ is central to Catholic Social Teaching:

Downloadable copies of the papal encyclicals are available here:
cbcew.org.uk/living-wage-encyclicals