Cardinal Tauran’s visit warmly received by people of all faiths 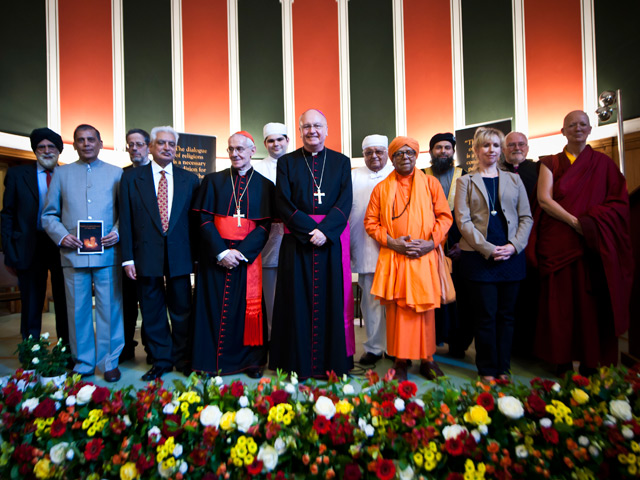 Cardinal Jean-Louis Tauran, the president of the Pontifical Council for Interreligious Dialogue, visited England from 12th to 16th June, to further the dialogue with the Jain, Sikh and Hindu communities. The meetings focused on the theme of peace, and the contribution that religions can make to it. The Cardinal also attended an event entitled “Together in Prayer for Peace”. During this event, representatives from the nine main religions in England took turns to offer a prayer for peace in their own tradition. Throughout the visit Cardinal Tauran was accompanied by Father Michael Santiago, who holds responsibility in the Pontifical Council for dialogue with Hindus, Sikhs, and Jains; Archbishop Kevin McDonald, who is the bishop in charge of interreligious dialogue at the Bishops’ Conference of England and Wales, and Katharina Smith-Müller, interreligious advisor at the Bishops’ Conference for England and Wales.

On Thursday morning, Cardinal Tauran visited BAPS Shri Swaminarayan Mandir, or “Neasden Temple” as it is known locally, and engaged in dialogue with the Hindu community on the theme of ‘Catholics and Hindus: The Practice of compassion as a contribution to peace’. During the dialogue session, at which he co-presided with Satyavrat Swami, he explained how close the theme of compassion was to Pope Francis’ heart: “He has spoken of a compassion that translates itself into care and concern for each and every person in our society, especially children, the elderly, the poor and the needy; of a compassion that builds up into an act of solidarity with those who find themselves on the margins of existence, of being protectors of the whole creation and every human being in it.” In his keynote addresses, Pujya Paramtattva Swami explained that “Hinduism encourages the embrace of a broader worldview, extricating us from the narrow confines of ‘I’ and ‘my’ to the universality of ‘we’ and ‘ours’. It teaches that the whole world is one family”. His respondent on the Catholic side was Father Martin Ganeri, a Catholic academic from Heythrop College, who spoke of God’s compassion as revealed and realised in Jesus Christ, saying that “God embraces our humanity with his divinity. He embraces the hatred and violence that are so much a part of the way human beings treat each other, with his love and self-sacrifice. He embraces death with his life.”

The evening of the same day brought the “Together in Prayer for Peace” event, which was attended by approximately two hundred people who joined together in a pledge for peace which was first used at the Day for Peace in Assisi in 1986. They promised to take up “the cry of those who refuse to be resigned to violence and evil”, and to “proclaim that peace and justice are inseparable, and that peace in justice is the only path which humanity can take towards a future of hope.”

On Friday, Cardinal Tauran visited the Jain community at the Oshwal Centre in Hertfordshire, and continued the dialogue with that community by joining in a discussion of non-violence as a contribution to peace. In his address, he summarised the essence of his visit to England: “Let there be no doubt that religions are a cause of love, unity and peace and if any religion teaches the contrary, it is no religion at all.” He was welcomed by the first British-born President of the Oshwal Association of the UK, Raaxeet Harakhchand Shah, and Dr Harshad N Sanghrajka, the Director of the Institute of Jainology.
A large audience, made up of Catholic guests and Jain hosts, heard Professor Nalini Balbir, Professor of Indology at the Sorbonne, call for an educational environment that “favour[s] a serene state of mind where benevolence and sympathy replace anger, feeling of ego, deceit and greed”, and stressed the need for thinking that transcends dualistic categories. Her respondent was Professor Michael Barnes, SJ, who stressed the importance of going beyond non-violence purely as an absence of physical acts: “To deal with the myriad forms of violence in our midst it is not enough that we exhort each other to non-violence – though that is, of course, a start. We also need to understand how different peoples and communities, sometimes with very different histories and traditional forms of belief, can learn from each other the virtues of co-existence. That is one of the great challenges of our time.”

Saturday brought the visit to the Sikh community at Guru Nanak Nishkham Sevak Jatha in Birmingham, at which the Cardinal’s party was joined by Archbishop Bernard Longley and his interreligious coordinator, Bill Ozanne. He was welcomed by Bhai Sahib Bhai Mohinder Singh Ji, who, in his welcome, spoke of the Sikh community’s contribution to the Millennium Development Goals. Cardinal Tauran reflected on the long shared history of dialogue, and the example of service set in Jesus Christ. The topic that continued this long dialogue tradition between Sikhs and Catholics was service to humanity as a contribution to peace. On this topic, Professor Gavin d’Costa, speaking on behalf of the Catholic community, said that “If we really want to serve, to bring peace into our world, we have to learn what service and peace are from God who is peace, a peace that surpasses all understanding” and talked of worship as the “single primary act of self-abandonment of ourselves into the arms of God”, which forms a basis for all service. His respondent was the Sikh academic Dr Jagbir Kaur Jhutti-Johal, who summed up the centrality of sewa, selfless service, for the Sikh community as follows: “Since God resides in all, as humans we need to respect our neighbour’s rights; give up our obsession with personal gain, and do service (sewa), (whether this is through physical work (tan), through our mental abilities (man) or materially (dhan – dasvandh), without desire (nishkam), for material, or spiritual reward. If we do this then we have done our duty, “dharam nibhaona”, in creating a society which is just and peaceful.”

Speaking at Birmingham Cathedral on Saturday, Cardinal Tauran said that interreligious dialogue is all about “being rooted in our own faith, cultivating, despite differences, harmonious relationships among believers of diverse religions and collaborating with them for the good of humanity with shared values and convictions.” Reflecting on his visit during his homily on Sunday in Westminster Cathedral, he added that the visits had been “educative and enriching” and urged all Catholics to “build up cordial relationships with your neighbours, colleagues and others belonging to other religions to promote the cause of peace”.

catholicnews.org.uk/Home/Featured/Cardinal-Tauran-visits-the-UK
Our Section on the Visit of Cardinal Tauran to the United Kingdom