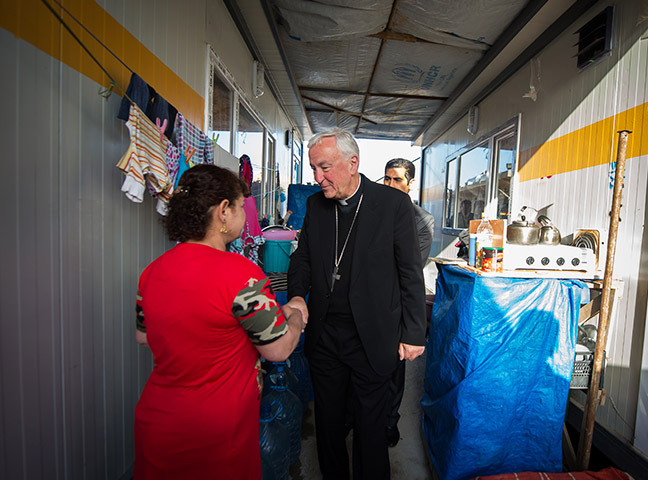 The Archbishop of Westminster, Cardinal Vincent Nichols, has travelled to Erbil, the capital of Iraq’s autonomous Kurdistan region, to meet displaced Christians living in makeshift camps who have sought refuge from ISIS violence.

They were driven out of their homes with little more than three hours notice. Then, at check points, they were robbed of anything of value. A fifty mile trek brought them to the relative safety of Erbil. But then what?

The local Archbishop told us a little of what it is like to have 125,000 displaced, traumatised people fleeing for their lives turn up overnight! They were welcomed and given every corner of space in which to find shelter.

The Cathedral itself could not be used for a week because the entire church became a shelter. Tents were gathered and bought and every patch of land used.

That was in August. Since then, while no one has been able to return to their homes, the progress made is remarkable. And it is mostly down to the efforts of the Catholic churches, both here and abroad. Many others have helped financially, led by aid agencies.

The governments in Erbil, for The Kurdish Regional Government, and in Baghdad are also working together in offering a substantial new camp for displaced persons despite all other financial and political difficulties.

We visited many hundreds of families, now in solid ‘caravans’, made of mobile containers, in five of the numerous centres. Educational efforts are in place, initiative encouraged and many are finding work. The effort is huge and hugely impressive.

So too is the leadership and the underlying determination. What is being provided is help with dignity. Displaced families are not allowed to sink into a status of being victims.
To begin with food was provided communally, now each family cooks for itself. Now families are expected to pay towards their rent, if at all possible. Demands are made on the children to participate fully. Rules in the centres are strict: no alcohol, no violence. This is tough love at its best.

Why? Because the effect of their brutal displacement has left many traumatised.

I met fathers of families who no longer had any sense of ‘self’ and of their responsibilities. Shape and purpose had disappeared from their lives.

I felt their raw anger and growing sense of helplessness. The children, on the other hand, respond with resilience and hope. The way forward for all of them is this combination of real help and clear expectation.

The interim aim is to give them their dignity as parents, education for children and a home, however makeshift and temporary.

This approach is enabling families and communities to stay together and try to maintain a semblance of normality and family life. But what was made repeatedly clear was these families want to go home. They want to go back to their houses and land.

The aid agencies’ efforts are considerable and helpful in desperate circumstances. More is needed. For this to happen, territories have to be liberated, a new rule of law established and a shattered social network rebuilt.

Across this region is a patchwork of faiths living together. Those who have been displaced include the Orthodox, the Chaldeans, the Syriac Catholics, the Church of the East and a range of other minorities among whom the Yezidis have suffered most terribly.

This delicate balance has been destroyed by the brutality of ISIS. Yet competing interests of various regional powers have contributed too.

The solutions will be hard to come to and will need sustained effort in which the fate of these displaced people must be central. They are a crucial part of the character and stability of the region and must not be abandoned.

As we celebrated the Orthodox Easter Vigil Mass with 2,000 people we heard their Bishop encourage them to be hopeful, to be courageous, to be ready to build again in the light of the strength and light of the Risen Christ.

And this bishop knows that his Cathedral in Mosul is being desecrated and vandalised and provocatively turned into a mosque. He knows it because the ISIS fighters regularly send him photographs of what they are doing. But his faith and courage are undiminished.

Here there are so many who have lost everything, many different religious traditions and Christian churches.

But they have not lost their faith in God, nor their willingness to work together and sustain each other. They give a remarkable witness and they need our help.