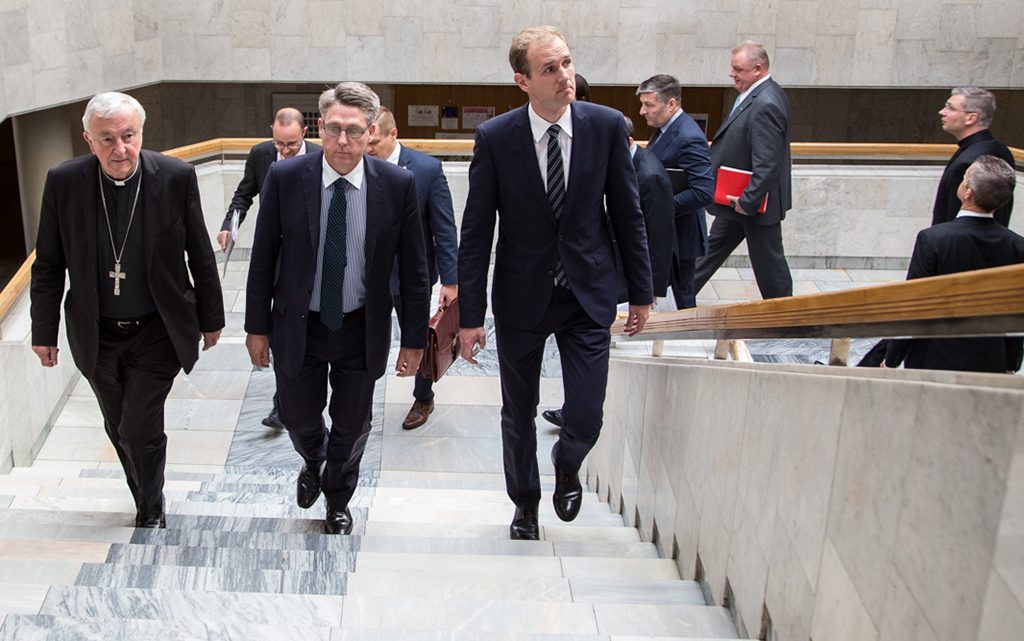 In his role as president of the Santa Marta Group, formed in 2014 with the encouragement and support of Pope Francis, Cardinal Nichols was invited to address the Seimas on 26 June 2017 and to meet with the prime minister Saulius Skvernelis to strengthen the links with Lithuania and encourage their commitment to the struggle against human trafficking. He was accompanied by Kevin Hyland, the UK’s Independent Anti-Slavery Commissioner.

In the UK, the focus of the Santa Marta Group has been on building local partnerships between dioceses and police forces, the Border Force, Customs and Excise and the National Crime Agency to:

Work with our national Safeguarding agency to use its network of paid and volunteer staff to identify potential victims.

We also liaise with our agency for seafarers, The Apostleship for the Sea/Stella Maris, to give specific support to the crews of ships entering British ports; Another essential network is our wide range of chaplains to national and ethnic communities.

This work is taking shape with many groups, including Lithuanians, in dioceses such as Salford, East Anglia, Southwark and Westminster.

Cardinal Nichols explained why the Catholic Church was committed to ending human trafficking and slavery. The foundations from which the Church acts are “a radical commitment to the dignity of every human person, a dignity which has to be protected and promoted in every circumstance and time; a dignity which does not depend on the abilities or status of a person but which is rooted entirely in the inner depth of the person’s existence, in the gift of human life which always comes from the Divine Creator who has shown himself to be our loving Father.”

“Human trafficking and slavery radically strips a person of this fundamental dignity, reducing them to the status of a commodity. It is an evil crying out to heaven. That there are over 20 million people callously held in modern slavery in our world today is a mark of deep shame on the face of our human family that no words alone can remove.”

The Cardinal praised the remarkable work of Commissioner Hyland in helping to establish human trafficking as one of the United Nation’s Sustainable Development Goals and thus the official commitment of every UN member state to work for the eradication of human trafficking and modern slavery.

At the heart of this commitment are clear aims for the Santa Marta Group: the well-being of every victim of human trafficking, for it is the victim who must always be central to our efforts; the enhancement of the work of law enforcement; the breaking up of criminal networks, the arrest and prosecution of the perpetrators; and thirdly the strengthening of the legal frameworks within which this work is carried out.

“All of this work depends on one essential quality – trust. That trust takes time to build up and effort to sustain but once established it allows both law enforcement and the Church to be work together effectively and within their areas of expertise.

“For the Church that is caring for vulnerable people and for police officers it is their honorable vocation to deter crime and prosecute lawbreakers. Together this in some ways unlikely partnership is making a real contribution to the common good,” said Cardinal Nichols.

Following the address to the Seimas, Cardinal Nichols had a meeting with law enforcement officials and then a meeting with Prime Minister Skvernelis, Minister of the Interior Eimutis Misiūnas, and Chancellor Algirdas Stončaitis.

On Sunday, at the invitation of the Archbishop of Vilnius, Gintaras Grušas, Cardinal Nichols was also present at the beatification of Archbishop Teofilius Matulionis. Pope Francis delegated Cardinal Angelo Amato, prefect of the Congregation for the Causes of Saints, to preside over the beatification ceremony.

The full address of Cardinal Nichols to Lithuanian Parliament can be found below.