Today the Vatican has announced that the Pope has appointed Cardinal Cormac Murphy O’Connor to two congregations that select bishops worldwide.

In a mark of extraordinary esteem, Pope Benedict XVI has appointed Cardinal Cormac Murphy O’Connor to two important Vatican congregations that select bishops for most dioceses of the Latin-rite Catholic Church worldwide.

Both congregations have many tasks including the erection, suppression and division of dioceses, as well as the supervision of the bishops in these dioceses, but their most important function relates to the appointment of bishops.

They screen and vet all the candidates to be bishops and present the pope with a list of three names, in order of their choice, for him to make the final decision. He accepts their first recommendation in well over 90% of cases.

The Congregation for Bishops handles the appointments of bishops for most of the Latin Churches in Europe and the Americas. It appoints about 135 bishops each year for these two continents.

The Congregation for the Evangelisation of Peoples, formerly known as Propaganda Fidei, is an enormous operation and is a kind of ‘mini-Vatican’ in relation to the mission territories.
It appoints bishops for about 1000 dioceses (roughly 37% of the world’s dioceses) in mission territories, which are mainly in Africa and Asia (excluding the Philippines), but also include Oceania (excluding Australia) and some areas in the Americas. This Congregation appoints about 50 bishops worldwide, each year.

In his new role, Cardinal Cormac will be directly involved in the appointment of Bishops for England, Wales, Scotland and Ireland, as well for countries in Africa, Asia, Europe, the Americas and Oceania.

Normally cardinals and a small number of bishops are appointed to these positions while they are still head of a diocese or a Vatican office. The appointments are usually for a five-year period, and are renewable.

It is highly unusual for the pope to appoint a retired bishop or cardinal to such positions for the first time. That Pope Benedict has decided to name Cardinal Cormac to these two important posts is an indicator of the great respect and high esteem which he enjoys with both the pope and senior Vatican officials.

His new appointments will bring him a heavy work-load. He will have to study many dossiers in advance of each meeting, and must be prepared to express his opinion and vote on the individual candidates. Insiders confirm that being a member of these two congregations is “a very time consuming task”.
This work will also require a lot of travel as all the meetings are held in the Vatican. He will be expected to attend and participate in the fortnightly meetings of the Congregation for Bishops, and in the monthly meetings of the Congregation for the Evangelisation of Peoples. Each meeting usually lasts a whole morning.

Given the heavy work load and travel, the overwhelming majority of the active bishops and cardinals who come to the meetings are from the Roman Curia. Only a very small number of those living outside Italy come regularly to these meetings in Rome, but one who does is the American Cardinal Justin Regali, who flies in every two weeks for the meeting of the Congregation of Bishops. In the USA they call him “Papa Justiniano”, and few doubt the role he plays in the appointment of American bishops.

Cardinal Cormac learned of his new role in the universal Church during his recent visit to Rome (October 14-20) when the Cardinal Secretary of State, Tarcisio Bertone, informed him of the pope’s decision.

As a result of this decision, the former archbishop of Westminster is now one of about a dozen cardinals (most of them from the Roman Curia) who are on both congregations.

Pope Benedict has given him a role of great importance which will have an impact on the future of the Universal Church in many lands. It also takes him deep inside the corridors of power in the Vatican. 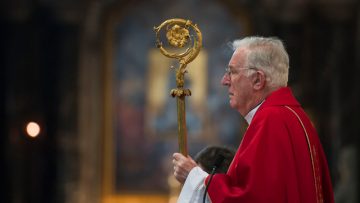 The Cardinal Celebrates his Golden Jubilee