On 9 February, Cardinal Vincent Nichols celebrated Vespers in the Chapel Royal, Hampton Court. This was the first Catholic ceremony held there in 450 years – since the reign of Queen Mary I.

The Bishop of London and Dean of the Chapel Royal, Bishop Richard Chartres and Home Secretary Theresa May also attended the event, which included music from world renowned choirs, the Sixteen and Genesis Sixteen.

Before Vespers, there was a discussion between Cardinal Vincent and Bishop Chartres on the theme ‘Faith and Crown’. Over 300 people attended the evening which was jointly organised by the Choral Foundation and the Genesis Foundation.

The service was mostly in Latin, with a homily by Bishop Chartres. The national anthem was sung at the end. Both Bishop Chartres and Cardinal Vincent praised the increased dialogue between their churches, and stressed the need for it to continue in troubled times.

Vespers was recorded by the BBC and will be broadcast on BBC Radio 3 on Wednesday 30 March at 3.30pm and again on Sunday 3 April at 3pm. 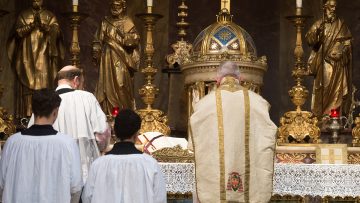