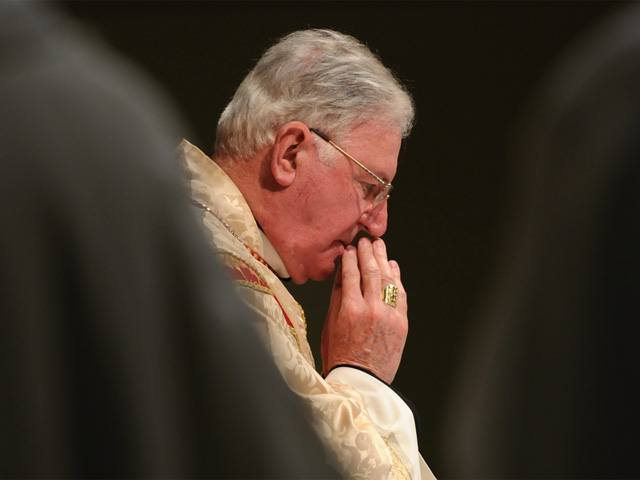 On Sunday 22 January, Cardinal Cormac Murphy-O’Connor was the guest preacher at a service to mark the Week of Prayer for Christian Unity at Chester Cathedral. As a former Chairman of ‘ARCIC’ – The Anglican-Roman Catholic Ecumenical Commission, the Cardinal has been involved with the search for Christian unity for a large part of his priestly life.

During the course of his address at the Cathedral, he named the three enemies of ecumenism – suspicion, inertia and impatience:

“For when we meet together and pray together the suspicions of the past dissolve and we reach the heart of the ecumenical movement which is a spiritual movement focused on Jesus Christ the Son of God to whom we pray and in whom we reach the Father.”

“We overcome inertia by what we do together.”

“There is a task to be done and perhaps, above all, we must not give in to impatience – we must persevere month by month, year by year.”

He recalled the two most memorable events in his thirty-five years of being a bishop – the visit of successive Popes to the United Kingdom:

“First of all, Pope John Paul came thirty years ago this year and I will remember, among the many other things, his visit to Canterbury Cathedral.

“When he and the then Archbishop of Canterbury, Robert Runcie, walked out of the Cathedral together, there were tears in my eyes: Behold before us the desires of so many hearts. It was a truly a momentous visit. Then just a year and a half ago Pope Benedict came and I remember Archbishop Rowan Williams expressed very movingly our join heritage derived especially from the Benedictines, under Augustine, send here by Pope Gregory in 596.”

He called for all to be brave in meeting the challenges of the present time together:

“Time and time again, together, we must proclaim, in season and out of season, the dignity of the human person made in the image of God from conception to the end of life. It means that, together, we reach out to the marginalised and to the poor. It means to be focused too on the centrality of the family. Our society is built up on the family and the communities that support the family. And, above all, together we assert that our Christian faith and all that is implied in our belief in God is alive, active and relevant in today’s secular society.”

And ended with the prayer:

“May they all be one just as, Father, you are in me and I am in you, so that they also may be in us so that the world may believe it was You who sent me.”

The unity service was led by church leaders from Churches Together in Cheshire including regional leaders from other denominations and the Bishop of Chester, the Rt Revd Dr Peter Forster. Music was by the Cathedral Choir, St Nicholas Catholic High School Choir and the Salvation Army Band. This year’s theme was ‘We will all be changed, by the Victory of our Lord Jesus Christ’ (1 Corinthians 15), chosen by Christians from Poland.

The Cardinal was appointed Co-Chair of ARCIC in 1982 and presided over its work with Bishop Mark Santer until 1999. After he stepped down, he continued to be involved: particularly as a participant in the Mississauga Meeting of Anglican and Catholic bishops which took place in Canada in 2000; and by attempting to implement some of what came from that meeting in the shape of the IARCCUM commission and the proposals in its document, Growing Together in Unity and Mission.