CBCEW » Migrants and Refugees » Migrants » » Britain has a ‘Moral Responsibili...

Muslim, Jewish and Christian faith leaders have called on Prime Minister David Cameron to urgently increase the number of Syrian refugees resettled in the UK in response to ‘one of the worst humanitarian catastrophes of our time’.

In an open letter, the Anglican Archbishop of Wales Barry Morgan, Head of the Jewish Reform Movement Rabbi Laura Janner-Klausner, Bishop Declan Lang, Chair of the Bishops’ Conference Department of International Affairs and Shaykh Ibrahim Mogra, Assistant Secretary General of the Muslim Council of Britain and Co-Chair of the Christian Muslim Forum, express their support for a joint call from Amnesty International, the Refugee Council, The Jewish Council for Racial Equality, Islamic Relief and CAFOD for the UK to do more to help Syria’s refugees find safety here.

The letter comes ahead of the first anniversary on Thursday 29 January of the UK government’s announcement of a special resettlement scheme for the most vulnerable refugees from the Syrian conflict. A year on, Home Office figures show that only 90 people have been offered asylum here.

Nearly four years into the conflict, ten million people have been forced to leave their homes, nearly four million of whom have fled the country. The vast majority are living in precarious circumstances in Syria’s neighbouring countries, and many are struggling to survive in freezing temperatures.

The faith leaders say that the conflict in Syria is one of the ‘greatest humanitarian catastrophes of our time’ and that neighbouring countries are at the point of collapse from the sheer numbers of refugees they are hosting.
They say in their letter:

Many refugees have experienced persecution, torture or sexual violence, sometimes because of their religion or ethnicity, or have disabilities or other urgent medical needs which make them particularly vulnerable. Some will not survive the winter.
We are proud of the way in which the UK has led the world in its humanitarian aid contribution to the Syria crisis. However, our help cannot end with aid. We urge you to show the same leadership on resettlement so that more of Syria’s most vulnerable refugees can find sanctuary here in the UK.

We welcomed the announcement, a year ago, of the Syrian Vulnerable Persons Relocation (VPR) scheme but we are disappointed that only 90 refugees have so far been offered a safe haven here in the UK via this route. One year on, we urge you to take this opportunity to commit to offering resettlement places to thousands, not hundreds, of refugees from Syria.

In the face of a desperate and growing need, we believe that Great Britain has a moral responsibility to continue our noble tradition as a compassionate and welcoming safe haven for those in need of protection. As Prime Minister, you have the power to offer hope to people whose suffering is almost unimaginable to us. We ask you to do this today.

Excluding Germany, the rest of the European Union (EU) has pledged to take in a paltry 0.17 per cent of refugees from the main host countries. In early January, Canada announced it would open its doors to 10,000 Syrian refugees.

Amnesty International UK director Kate Allen said: “The UK government’s relief efforts in the region are to be commended but it is clear that so much more needs to be done to protect people fleeing the Syrian conflict, including those at risk of persecution due to their religion or ethnicity.

“A year on from agreeing to resettle hundreds of refugees, the UK should take this opportunity to up their game and resettle thousands of Syria’s most vulnerable. The UK has done this in response to other conflicts, what is stopping this government from doing the same?”

Refugee Council Chief Executive Maurice Wren said: “A year ago the British Government made a promise to some of Syria’s most vulnerable refugees. We promised them safety. We promised them hope. We promised them a future. If David Cameron fails to significantly increase the scale of Britain’s resettlement scheme he will have broken that promise.”

Alan Thomlinson, Cafod’s Manager for the Syria Crisis, said: “The number of Syrian refugees accepted into Britain so far is woefully inadequate. Britain has a proud tradition of helping those in need, and – with no end in sight to the war – we need to show solidarity with the countries and communities that are bearing the brunt of this appalling crisis.”

Edie Friedman, Executive Director of The Jewish Council for Racial Equality said “We in the Jewish community know only too well the perils of being refugees and the indifference which too often meets their desperate plight to find sanctuary. Syrians now make up the largest refugee group in the world. We appreciate that this is not a job for Britain alone, but we must do our fair share.”

Islamic Relief’s UK Director Jehangir Malik’s said: “This is the world’s worst refugee crisis for generations, and we should do more to help the countries of the Middle East by hosting some of the most vulnerable of Syria’s refugees in the UK. The refugees I’ve met with Islamic Relief in Lebanon have suffered unimaginable trauma and yet so many of them continue to suffer because the authorities are stretched to breaking point trying to meet their basic needs for food, warmth and shelter.”

Bishop for Migrants: “A human being’s worth is defined and determined by their God-given dignity, not by the papers they do or do not carry” 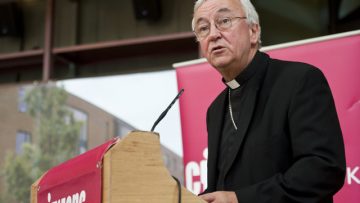 Archbishop: Fathers can have ‘powerful and positive’ influence on tomorrow’s good citizens