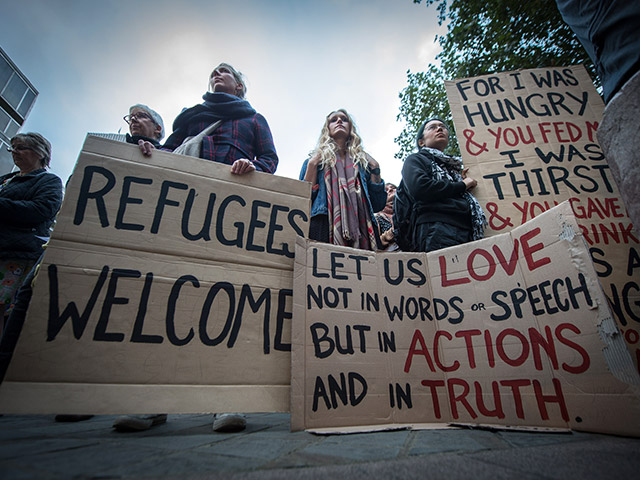 CBCEW » Migrants and Refugees » Community Sponsorship » » Bishops call on parishes to get inv...

Bishops and Catholic parishes have given an enthusiastic welcome to the government’s launch today of the community sponsorship scheme for Syrian refugees.

The scheme gives Catholic parishes the chance to get involved in personally welcoming and supporting Syrian refugees as they arrive in the UK and then helping them to take the responsibility for their own resettlement and integration in a community. The first families to arrive under the community sponsorship scheme will arrive later this Summer.

The Catholic Church, led by Caritas Salford, has been heavily involved in the putting together of this scheme and those involved have thanked Richard Harrington MP, and his team, for their hard work in bringing this scheme to fruition. Community sponsorship is the best way of channelling the outpouring of support, concern and generosity across the country for vulnerable Syrian refugees made homeless and destitute by conflict and war. All Catholics who are keen to help have been encouraged to get involved with this community sponsorship scheme by contacting their Diocesan refugee co-ordinator or Caritas Social Action Network (contact details below) for further details on what to do.

“Last year, Pope Francis invited every parish, religious house and monastery in Europe to respond to the growing refugee crisis by offering a place of sanctuary to families fleeing from war and persecution in their home countries. The Pope called on our generosity and solidarity to recognise and act upon our common humanity. Now we are all able to take up that call with the launch of the community sponsorship scheme for Syrian refugees.

“Catholics have been keen to get involved in helping to resettle refugees in the UK, responding to the situation with kindness and compassion as we are called to when confronted by those in need. However, that generosity needs to be channelled and we are therefore delighted that community sponsorship is being launched in the UK by the government; Catholic charities have been involved with shaping the scheme and we already have groups keen to sign up and help. This innovative scheme will enable everyone to get involved with welcoming refugees, offering a very real and tangible way for people to help new arrivals settle into their communities.

“Caritas Salford is leading the way for the Catholic community, with St Monica’s parish in Salford Diocese part of the pilot scheme. I encourage all those parishes and groups who are keen to help to contact their Diocesan Refugee Co-ordinator or Caritas Social Action Network (who are able to give full details on a national level) to get further details on how they can assist in this sponsorship scheme, which is the best way of helping those Syrian refugees in need.”

“The Catholic Church has been heavily involved in putting this together and after a huge amount of work, both the Home Office and the local authority are ready to give the go-ahead. We now look forward to receiving the first families later this Summer.

“There has been a lot of interest from other Catholic parishes and groups who want to get involved. They have been calling us and also Caritas Salford, where Mark Wiggin has been at the forefront of this project, so St Monica’s should be the first of many parishes take on the resettlement of Syrian families.

“I am delighted that St Monica’s parish in Flixton is now able to welcome a Syrian refugee family through the government’s community sponsorship as it launches this week. We are always called to respond to hatred with love, to be dedicated to justice and to respond to need with generosity.

“It is a source of pride that the parish of St Monica’s has worked so hard to get everything ready to be part of this pilot scheme. There is tremendous generosity throughout the parishes and St Monica’s, as host for the Syrian family, has shown how this generosity can be channelled into care for those people who have lost everything.

“Caritas Salford has also played a key part in sponsoring the parish and offering guidance throughout. Our hope is that through this pilot scheme other parishes and groups can be encouraged and inspired so that the terrible suffering of many Syrian families can be alleviated.”

For further information on how to get involved in the scheme: