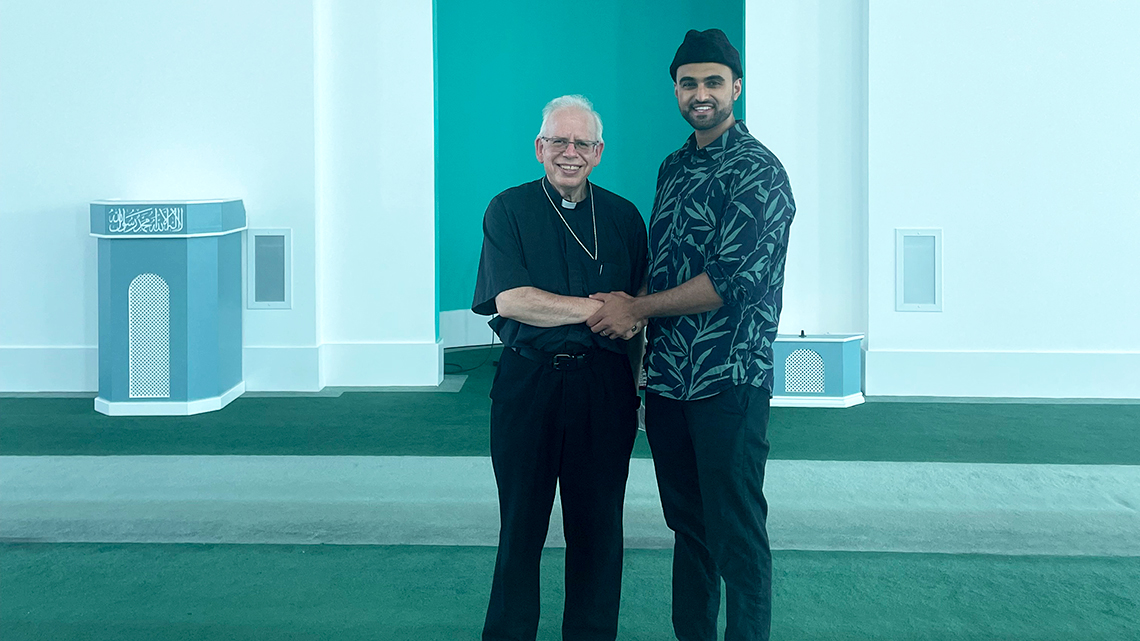 CBCEW » Interreligious Dialogue » » Bishop Hendricks visits one of the ...

The delegation was invited to the mosque, the central complex for the Ahmadiyya community, by Imam Sabah Ahmedi – one of the UK’s youngest Imams and a prominent young faith leader.

Imam Ahmedi was born and raised in Manchester, before studying in London for seven years at Jamia Ahmadiyya UK – an international Islamic seminary and educational institute of the Ahmadiyya Muslim Community.

Today he uses social media to advocate for an improved understanding of Islam and works collaboratively with the UN and other young faith leaders to engage in positive religious dialogue using digital channels.

The Ahmadiyya movement is an Islamic revival movement originating in Punjab, then-British India, in the late 19th century. It was founded by Mizra Ghulam Ahmad who is said to have been divinely appointed by Allah to renew Islam. Mizra Ghulam Ahmad founded the community emphasising the essential Islamic teachings of peace, love, justice, and the sanctity of life.

Today, the Ahmadiyya Muslim Community is the world’s largest Islamic community under one divinely appointed leader. The community spans over 200 nations with membership exceeding tens of millions, and according to Imam Sabah, is currently the fastest-growing religion in the world.

The visit was organised to build foundations for a relationship between the Bishops’ Conference and the Ahmadiyya Islamic community in England and Wales.

The plan of salvation also includes those who acknowledge the Creator. In the first place amongst these there are the Muslims, who, professing to hold the faith of Abraham, along with us adore the one and merciful God, who on the last day will judge mankind.

Mission Adviser, Elliot Vanstone, was a member of the Bishops’ Conference delegation:

“We started off with a tour around The Baitul Futuh Mosque, one of the largest Mosques in Western Europe. Construction of the Mosque was completed in 2003 at a cost of around £15 million – a sum raised entirely from donations from the Ahmadi community.

“The Mosque is the central complex for the Ahmadiyya community that prides itself on its fantastic outreach work and serves as a true base for the local community. The design of the mosque resembles a more traditional Islamic design fused with modern British architecture. This typifies the mentality of the Ahmadi community – to embed themselves within the local culture and become a flourishing part of the local network.

“Sabah himself is involved with numerous outreach projects due to his presence on social media and appearances on national TV. He frequently contributes to programmes such as GB News and This Morning talking about the Islamic faith and misconceptions that sometimes circulate around the mainstream media.

“The community has an in-house radio station that broadcasts 24/7. One of their many positive initiatives engages younger Ahmadi Muslims and aims to stop the youth diverting into anti-social behaviour, making them feel part of the whole Ahmadi community.

“The mosque also hosts the weekly Friday Sermons delivered by the Head of the Ahmadiyya Muslim community, Mizra Masroor Ahmad, who is the current and fifth leader of the faith, with the official title ‘Fifth Caliph of the Messiah’. The Friday sermons are broadcast across a global television network and subsequently relayed over the radio throughout the week.

“The tour was educational, and we discussed the separate prayer rooms for men and women that were designed to preserve modesty as prayer is conducted in a prostrated manner. Imam Sabah explained to us that the design of the mosque was focused on ‘simplicity’ so that everyone present would focus on the preacher and their own prayers and meditations.”

Bishop Paul Hendricks, who had visited the temple previously, said Grace before a shared meal – a remarkable moment as visitors and hosts prayed together. Whilst eating, the group looked to the future and the opportunity to build stronger engagement and dialogue between the Ahmadiyya Muslim community and the Bishops’ Conference Mission Team.

Bishop Hendricks and the Bishops’ Conference Mission Team plan to return the favour and invite Imam Sabah Ahmedi to visit a Catholic Church.