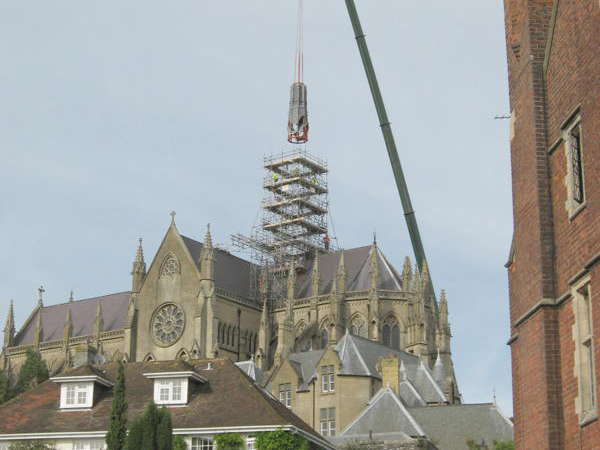 The Dean of Arundel Cathedral, Canon Tim Madeley was delighted by the recent announcement that the First World War Centenary Fund had given a grant of £200,000 to the cathedral.

He said that “Despite a robust regime of maintenance by the Diocese of Arundel & Brighton for the upkeep of the building, exceptional costs do occur. Over the last few years, there has been a continual problem with the ingress of water into the property particularly on the south side of the building through the deterioration of the lead in the stained glass windows. This has become an urgent matter to stop the fabric of the building deteriorating any further hence the need to apply to the First World War Centenary Cathedrals Repair Fund.

“The grant will be used to re-lead the south facing windows especially the beautiful St Philip Neri window in the south transept designed by Nathaniel Westlake. The work is due to commence in the New Year and will act as a worthy memorial to the 98 men of Arundel who were killed in the First World War”.

The cathedral which was completed on 1 July 1873, to designs of Joseph Hansom, inventor of the Hansom cab and became a Cathedral and the Mother Church of the Diocese of Arundel & Brighton in 1965, plays an important part in the life of the town of Arundel and in the life of the Diocese. It is famous for its annual Carpet of Flowers Festival and Corpus Christi procession which takes place in the summer. This year the focus of the Festival was 1914-2014 Great War centenary.

Last weekend, as well as the ongoing cycle of Christian prayer including a sung Mass with the Cathedral Choir on Sunday for the Feast of All Saints with parishioners and visitors, they also provided a venue for the overseas charity, CAFOD (Catholic Agency for Overseas Development) for a wonderful musical concert in aid of their work across the world.

The Government’s First World War Centenary Cathedral Repair Fund was set up in April this year in recognition of the powerful symbol that cathedrals are of Britain’s shared history, as well as the significant role they will play throughout the commemorations of the centenary of the First World War.

So far, 41 Cathedrals in England have received awards for vital repairs including Clifton Cathedral in Bristol, awarded £600,000 for urgent repairs to its roof.

Sir Paul Ruddock, Chair of the First World War Centenary Cathedral Repairs Fund expert panel and Chairman of the Victoria & Albert Museum, said of the fund, “The appeal of cathedrals is vast and enduring. Every part of English history can be seen somewhere within their walls, and I am delighted that this second round of grants is providing vital support to keep them open for all to enjoy.”

The £20million Cathedral Repairs Fund was announced by the Chancellor in the Budget 2014. Grants will allow cathedrals to undertake urgent repair work, including keeping the building wind-proof, weather-tight, safe and open to the public, and preventing further deterioration of the building.

dabnet.org
Official website for the Diocese of Arundel and Brighton