Archbishop: WYD enables young people to give a powerful witness to Christ that the world can’t ignore 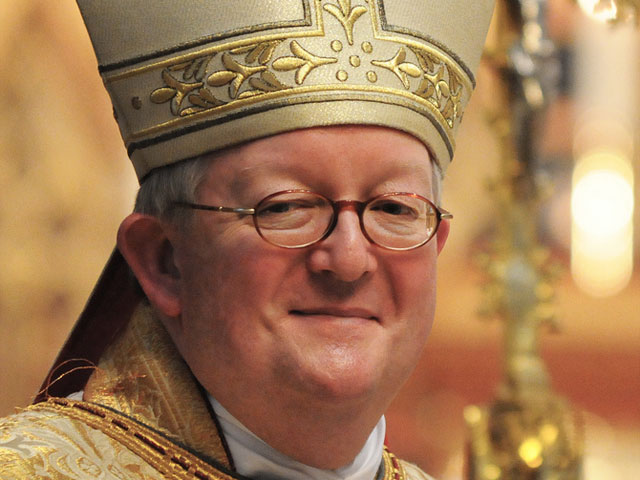 The twenty-eighth World Youth Day will be held in Rio de Janeiro, Brazil, from Tuesday, 23 July to Sunday 28 July, on the theme: “Go and make disciples of all peoples” (Matthew 28:19).

Archbishop Bernard Longley, Archbishop of Birmingham, a member of the Pontifical Council for the New Evangelization, is one of five bishops from Great Britain travelling to Brazil for WYD Rio 2013. On the eve of his departure Archbishop Longley gave Peter Jennings an exclusive interview.

What do you see as the main hope and purpose of World Youth Day 2013?

Archbishop Bernard Longley: “World Youth Day in Rio continues the tradition begun by Blessed Pope John Paul II of inviting young Catholics from across the world to come together to witness to their faith, first to one another and then to the world at large.

“Emeritus Pope Benedict XVI and now Pope Francis have continued and strengthened this tradition by their presence at World Youth Day and this underlines the main hope of the pilgrimage which is to strengthen and enrich the living faith of the millions of young Catholics around the world, even those who cannot make the pilgrimage to Brazil.

“The principal purpose of World Youth Day is to place Jesus Christ and faith in him at the centre of young people’s lives and to enable them to give a powerful witness to Christ that the world cannot ignore. In our global village this is the greatest gathering and festival of young people’s faith.”

What particular message do you hope Pope Francis will deliver to the world’s young Catholics as they gather together in Rio?

Archbishop Bernard Longley: “I feel sure that Pope Francis will continue to emphasise the Way of Jesus Christ as the best option for any young person to take, and that that Way involves loving and self-sacrificing service of others.

“For that reason I am delighted that the young pilgrims from the Archdiocese of Birmingham have been spending their first week in Brazil with a Catholic community in the hills above Petropolis about fifty kilometres north of Rio. They have been sending daily reports back to the diocese of their wonderful experiences with the children and young people of the local community and of the warm welcome they have received there.

“I think Pope Francis will encourage young Catholics to be people who care about others and are willing to give their time and energy to those in need because of their love for Christ.”

In what ways will this first return of Pope Francis to South America heighten the expectations of surrounding the celebration of World Youth Day?

Archbishop Bernard Longley: “There is no doubt that Pope Francis can expect a rapturous welcome back to South America, in some ways reminiscent of the way Poland welcomed Blessed Pope John Paul II on his first visit after being elected Pope. I believe this will be reflected in the numbers of young people expected to attend the main celebrations of World Youth Day.

“The faith of the young Catholics of South America, and its exuberant expression, are likely to have a deep effect on the faith of our young Catholics from Europe. All that we have seen of Pope Francis, of his warm humanity and spontaneous ways, will heighten expectations that this will be an exceptional World Youth Day and one that will bear lasting fruits.”

In what particular ways do you hope that the Year of Faith will impact the catechesis in Rio leading up to the arrival of Pope Francis?

Archbishop Bernard Longley: “The Year of Faith has already influenced the theme of this year’s World Youth Day, on the theme: Go and make disciples of all people.

“That sense of sharing in the evangelizing mission of Christ and the Church has been heightened through the initiatives of the Year of Faith and in our own diocese it has inspired the spiritual preparation undertaken by our pilgrims at home.

“I think the Year of Faith has also encouraged parishioners to support the fund-raising efforts of the young people with even greater generosity this year, as they recognise in them the ambassadors for faith and the leaders of the future that we need in the Church. The catechesis in Rio over coming days is likely to reflect that awareness that we are forming young Catholics to be missionary in their outlook and enthusiastic witnesses who really know their Catholic faith and are equipped to explain and share it with others.”

Remembering your participation at World Youth Day 2011, in Madrid, Spain, why do you feel it to be so important that you should accompany your young people in Rio?

Archbishop Bernard Longley: “I have been blessed with opportunities to accompany young Catholics to World Youth Days in Cologne, Sydney and two years ago with the Birmingham pilgrims to Madrid.

“I have witnessed the impact of World Youth Day on the young people and it is notable that many of them continue to be fully involved in the life of their parishes and the diocese in a variety of ways. Some of them are now serving other young Catholics through their work at Soli House, at Alton Castle and in local youth groups supported by the Birmingham Catholic Youth Services (BCYS).

“World Youth Day offers bishops an opportunity to be pilgrims alongside the young people of their dioceses and this is a very inspiring and encouraging experience. For me, being in Madrid in 2011 strengthened the bonds of faith that unite the bishop with the priests, deacons, religious and all the lay faithful within the family of the diocese – all our young pilgrims come from family, school and parish circles and sometimes university and work which also serves to widen the bishop’s experience.

“I am also grateful that I shall be making this pilgrimage alongside Bishop William Kenney from our own diocese, Bishop Alan Hopes from East Anglia and Bishop John Sherrington from Westminster, each of us accompanying the young Catholics from our own diocese.”

In what ways do you see the strength of the Archdiocesan delegation to World Youth Day in Rio, as reflecting the steady work over the years of the Birmingham Catholic Youth Service (BCYS)?

Archbishop Bernard Longley: “World Youth day in Rio is one of a number of important ways that BCYS helps to deepen the faith of the young people of the Archdiocese. Their input, alongside that of Fr Jan Nowotnik and Fr Paul Moss with the Vocations Office, has been of enormous importance for the preparation of the young pilgrims for Rio.

“I should mention too the enthusiastic support of a number of our schools and the chaplaincy and teaching staff who have helped our pilgrims prepare. While we are in Rio many other young Catholics from around the Archdiocese will be gathering at the national WYD event Bright Lights in Aylesford and we shall be united with them as they also receive the Holy Father’s message from Brazil.”

The Post Office of Brazil has announced the release of a special 1.80 reais (80 US cents) postage stamp on Tuesday, 23 July, after the inaugural Mass of WYD on Rio’s famous Copacabana beach, to commemorate: WYD Rio 2013 and the visit of Pope Francis to Brazil. The stamp features the green and yellow colours of the Brazilian flag and a picture of Pope Francis giving a blessing against a background of Rio’s iconic Sugar Loaf Mountain and Christ the Redeemer statue.

Will this special Brazil postage stamp help to spread the message of WYD Rio 2013?

Archbishop Bernard Longley: “As I prepare for the journey to Rio de Janeiro to join the young pilgrims from the Archdiocese of Birmingham I am delighted to learn that the Post Office of Brazil is issuing a special stamp to commemorate this important spiritual gathering with Pope Francis.

“I hope to use this fine commemorative postage stamp in the knowledge that it will bring World Youth Day in Rio to the attention of a much wider audience, especially back in Europe.

The Archbishop of Birmingham added: “I am sure that many of the young pilgrims will want this stamp as a souvenir of such a memorable moment of faith in their lives.”

Meanwhile, Pope Francis will make his first overseas Apostolic Journey – since his election as Bishop of Rome on 13 March – to Brazil. During World Youth Day the Holy Father will address young Catholics from many countries throughout the world.
World Youth Day 2013 will be the second World Youth Day to be held in South America; the first being in Buenos Aires, Argentina, during April 1987.

Peter Jennings is Press Secretary to the Most Reverend Bernard Longley, Archbishop of Birmingham, and to the Archdiocese of Birmingham.