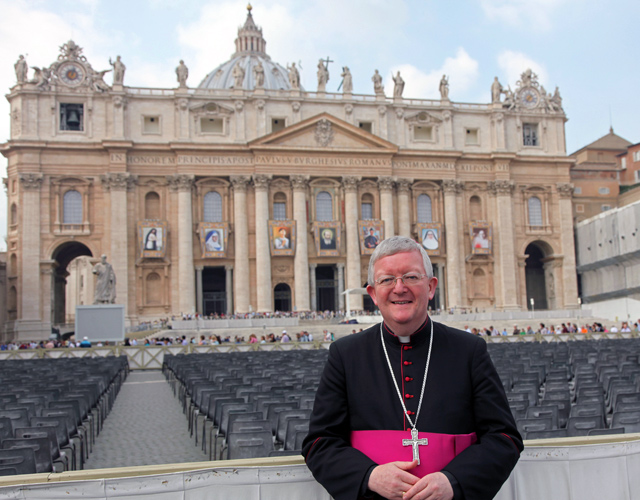 Archbishop Bernard Longley spoke with Zenit about the New Evangelization, and the example which Blessed Dominic Barberi and Blessed John Henry Newman bring to the faithful in the Church.

ZENIT: Throughout the Synod we have been hearing a great deal about the role of the laity in the New Evangelization. However, what is being said about the importance of promoting religious vocations, especially among young people?

Archbishop Longley: “There is a very strong emphasis on the value of consecrated life within the Church and for the New Evangelization; and recognition that the appreciation for the consecrated life and the life of the religious, as well as for the vocation to ordained ministry, has its roots in the family. The appreciation within the family for those gifts of ministry, especially in terms of ordained ministry, the sharing in our Lord’s own priesthood, springs from an appreciation for the priesthood of Christ as experienced in the lives of priests and deacons within the Church.

“The role of the laity in itself is a theme that is emphasized also, because working in collaboration with those in ordained ministry, lay faithful are in the places where they can preach through the example of their lives, their own witness to the faith, for example as journalists, as politicians, as people in public life, as those in healthcare, indeed in all spheres of activity. This reminds people of the vision of the Second Vatican Council: this universal call to holiness is also a call to evangelize in the world. Lay Catholics in their professional and public life, and within their family life and among their neighbours as well, have an opportunity to reach where, very often as pastors, it is very difficult for us to reach.”

ZENIT: The Patron for the Archdiocese of Birmingham for this Year of Faith is Blessed Dominic Barberi. Could you speak about why he was chosen as the Patron?

Archbishop Longley: “The relationship between Blessed Dominic Barberi of the Mother of God – the Italian Passionist priest who had a burning desire to come to England and to evangelize there – and Blessed John Henry Cardinal Newman, is something I mentioned in my Intervention. Blessed John Henry Newman’s heart was touched by the example and the witness of this Italian Passionist. We’ve adopted Blessed Dominic Barberi as the Patron for the New Evangelization and the Year of Faith in our own Archdiocese in Birmingham, not least because next year is the 50th anniversary of his beatification.

“I want to encourage people to intensify prayer, especially for the intervention of Blessed Dominic and Blessed John Henry Newman, because it would be marvellous to see them both eventually canonized, perhaps together, if that is the will of the Lord.”

ZENIT: “You were appointed Chairman of the Catholic Bishops’ Conference of England and Wales Special Commission on Overseas Seminaries. There is a rich history of mission attached to those seminaries, especially at the time of the Reformation at a time when it was illegal to train priests in England. For instance, the Venerable English College here in Rome, which this year celebrates its 650th anniversary, has such a history. Could you speak about promoting, or renewing this spirit of mission throughout this Year of Faith?

Archbishop Longley: “I am delighted that I’ve been called upon by my own Bishops’ Conference of England and Wales to serve our three seminaries overseas – the two seminaries here in Rome, the Venerable English College and the Beda College; also St Alban’s College, Valladolid in Spain.

“The history of the Venerable English College reaches back to the time of the Reformation as a seminary, and as a hostel for pilgrims to Rome much before, emphasizing the link between England and Wales, and the Holy See. The Beda College, a Pontifical College situated near to Saint Paul’s Outside the Walls, was developed principally for older vocations; those who were converts to the Catholic Faith.

“The two old colleges spring from a desire to ensure that the Catholic faith wasn’t lost within England and Wales, and now they give our seminarians in those places an extraordinary experience of the Universal Church. That is something which they carry with them into ministry as priests.

“I am grateful that all three of our overseas seminaries are well supported. The men who come home as priests to England and Wales have a very deep sense not only the bond of with the Holy Father, but of the universality of the Church. These are two things which we have experienced in a remarkable way during this Synod of Bishops on the New Evangelization.”

Part one of the Zenit interview