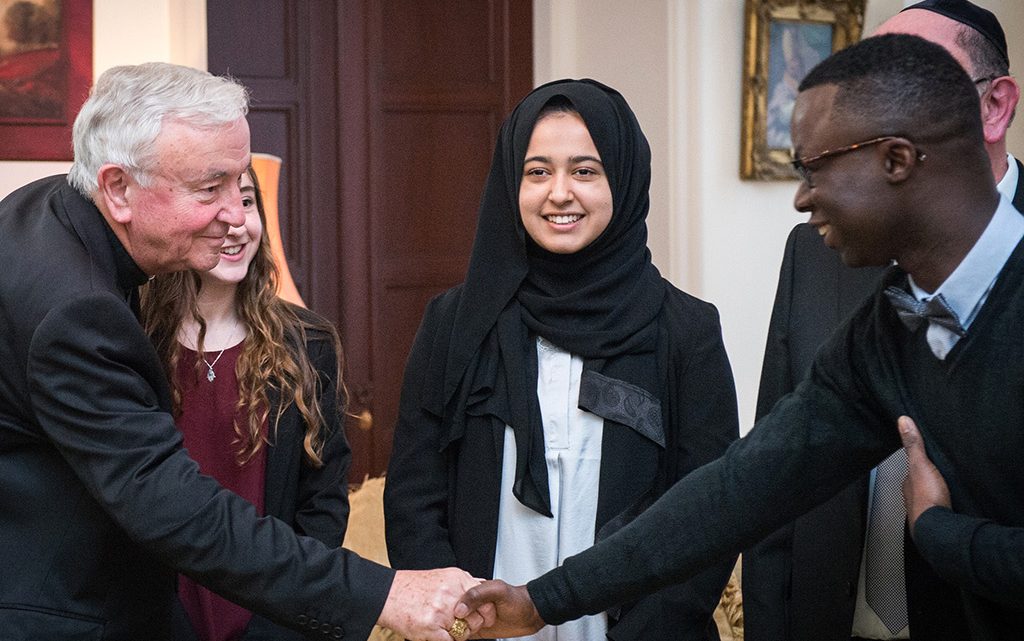 The evening brought together 100 young people from across London representing a number of religions to discuss creative ways in which people of faith could engage with wider society.

These thoughts and ideas were then presented to Cardinal Nichols, Chief Rabbi Ephraim Mirvis and Mayor of London Sadiq Khan.

The Cardinal welcomed the young people and other guests, describing it as an opportunity to listen, understand, and enjoy each other’s company. “It is by listening that we make the first steps to understanding each other,” he said in his introduction.

The chairwoman of the Naz Legacy Foundation, Hina Bokhari, said the evening’s aim was to provide the “perfect opportunity for people of different faiths to get together, talk, relate, and discuss, to get to a point where there could be a solution too”.

She said it was important that faith and community leaders were “investing their time in the future”.

The three guest speakers stressed the importance of the role that young people play in society – particularly people of faith.

Rabbi Mirvis said young people were seeing the example of their leaders in “coming together to produce a harmonious society”. He also made reference to the recent terror attacks in Westminster, Manchester and at London Bridge, explaining that “religion does not include within it the notion of causing harm to others” but rather to enhance life. The Chief Rabbi said that the responsibility of people of faith is to “reflect the light of the Creator, of scripture and of religious traditions”.

Mayor of London, Sadiq Khan, emphasised that young people “have a crucial role to play in our city and country” and asked them to lead those around them by their example of mixing with everyone, irrespective of their background or faith. He praised the young people for their advocacy of faith and heralded London as a unique city for allowing people to “be who they are” using the Interfaith Iftar as an example of the openness and diversity demonstrated by the people of the capital.

Many of the young people said that sharing their traditions with others was an important part of their faith and a group of students from Westminster College proposed establishing a nationwide music and arts festival with the aim of educating others in different traditions, as well as promoting a unified message of peace.

Mayor Khan concluded by stressing that “values of love and kindness will always be stronger” and the group agreed that celebrating commonality rather than fearing difference was an essential step in promoting cohesion in society.

flickr.com/catholicism
Photos from the Interfaith Iftar at Archbishop’s House, Westminster, can be found on our Flickr photostream.