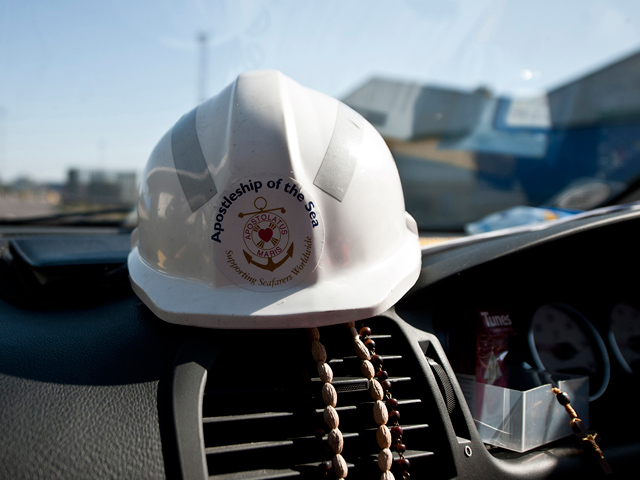 News from our maritime agency Apostleship of the Sea

A Mass was held on Monday, 18 August, for the crew of the ferry on which a shipping container was found with 35 migrants at Tilbury port.

The discovery has left the crew of the Norstream distressed and Catholic seafarers’ charity Apostleship of the Sea (AoS) is supporting them.

“A team of chaplains said Mass and conducted a blessing on board following requests from the mainly Filipino crew,” said Wojciech.

The crew set up a table near the spot where the shipping container had been located on the ferry. Each crew member lit a small candle and placed them on the table which served as an altar.

After Mass, a blessing took place with prayers and holy water was sprinkled on areas identified by the crew. Work on the vessel stopped for an hour while the service was conducted.

“We trust that the power of the Eucharist brings peace, strength and comfort to the crew. After the service we spoke with the crew and the captain handed us a note that read, ‘Gentlemen, thank you very much for your support and for your beautiful service today,’” said Wojciech.

Bishop Patrick Lynch, Migrants Bishop at the Catholic Bishops’ Conference of England and Wales said the church’s thoughts and prayers are with those who experienced terrible suffering trapped in the shipping container.

“It is becoming increasingly apparent that vulnerable men, women and children are being exploited by criminals all over the world and that we must respond compassionately to their cries for help,” he said in a statement.

Recognising and responding to the needs of seafarers is part of AoS’ pastoral care. AoS deploys its chaplains in Britain’s largest ports, including Tilbury, where thousands of seafarers visit each year.