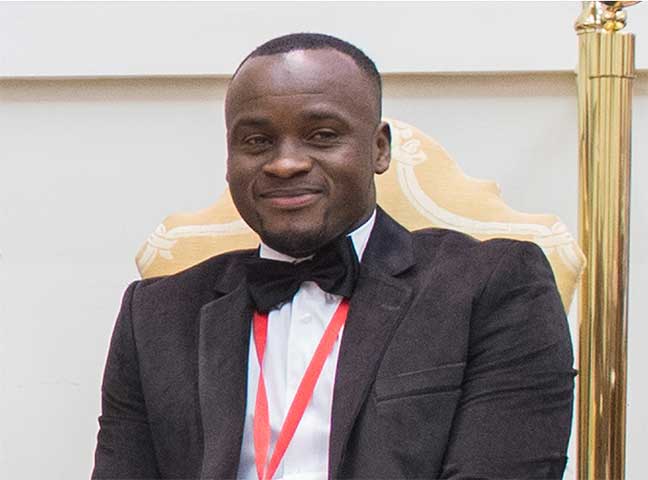 Al Bangura was born and raised in Sierra Leone but now lives in London with his wife and young children. He is a professional footballer who has played for Watford Football Club in the UK’s Premier League. Al is also a survivor of human trafficking. This is his story…

I was like any ordinary young boy growing up. I loved to run around, laugh and play with my friends. My bare feet were a permanent shade of orange, coloured by the hours spent kicking a ball around on the dusty ground near my home.

I grew up with my two younger sisters, my mother and my father, who at the time was head of a secret society. I was just a one-year old when he died but by the time I turned 15 I was put under lots of pressure to take on my father’s position. During this time, Sierra Leone had experienced a brutal civil war and fearing for my life and family, I was sent to Guinea.

I was desperate to protect and provide for my mother and sisters but I was in a strange country and didn’t know who to turn to. It was here that I met a Frenchman who promised the world – the opportunity many young men and I in particular had dreamed of – the chance to play professional football. I began to trust this man but it was here my nightmare truly began.

I was taken to Paris on the promise that I would play for a European football team. From there though I was taken to London. It quickly became clear that something wasn’t right. I was taken to a hotel and left there, alone. Very soon, older men began to turn up and tried to get close to, then touch and then rape me. Scared and afraid I didn’t know what was happening, couldn’t speak English and had no one to turn to for help. I felt trapped. However, against all odds, and I still don’t know how, I managed to escape.

I found someone who spoke my language and he paid for my bus ticket to the UK’s Home Office. They couldn’t verify my age, as I didn’t have any identification. I was put into a home in Chertsey in the South East of England and it was there that I started to play football. Amazingly a scout for Watford Football Club spotted me and I was signed to play for the team. I was able to help get them promoted to the Premier League and ended up playing in front of thousands of people at some of the most famous stadiums in the world.

I realised how lucky I was to have got away. Sadly so many others in my position don’t. In countries all over the world, trafficking not only exists but is thriving. In West Africa, my story is not uncommon. Thousands of young boys, many aspiring to be footballers, are sold a dream, which ends in a nightmare. In fact I still hear stories like mine from back home.

The truth is, slavery doesn’t just happen in far away countries. It happens in our cities, towns, and neighbourhoods. It is happening now and it has to stop. Its perpetrators need to be brought to justice…for me, for other victims, for you. Traffickers need to go to prison so they can’t continue their criminal activity.

Football is my passion and it has given me everything I have. Most importantly it gave me freedom. What happened still affects my everyday life. I find it hard, for example, to trust football agents who claim to represent my best interests and I’ve struggled to make the most of my talents. It has sometimes impacted my ability to provide for my family in these latter days of my career. However, when I play football I still feel free. I find my confidence. I start to smile.

I am now proud to now be an ambassador for Sport for Freedom, a charity that uses the positive power of sport to raise awareness about human trafficking and help rehabilitate its survivors.

Just a week ago I spoke at Football for Freedom, an International U16’s Tournament hosted by our charity in partnership with the Premier League. It brings together young academy players from the UK as well as international teams. I shared the stage with Kevin Hyland, the UK’s fantastic Independent Anti-Slavery Commissioner who has already achieved a great deal in his first year, and I was able to educate and tell my story to the young boys who are at the start of their footballing careers.

I was also truly honoured to speak at a service to commemorate the work of William Wilberforce and the UK’s current fight against modern slavery. The British Prime Minister, Theresa May, who has been an inspirational champion for this important cause, was also in attendance and spoke passionately about the need to combat trafficking and modern slavery. She spoke to me privately and thanked me for the work I am doing.
Being here today though and having the opportunity to share my story with all of you and meeting His Holiness is one of the most special moments of my life.

I will continue to represent Sport for Freedom and use the power of sport to educate others about this awful crime. It is amazing to see how even an hour of sport or physical activity can bring some relief to survivors who have experienced real terror. It can help build trust, hope and confidence again. Sport can rebuild lives and it can bring communities together. That’s how I’ve chosen to help and I hope you can all find it in your hearts to do whatever you can. I’m confident that by working together we can help end human trafficking and modern day slavery.

sportforfreedom.org
Official website for the Sport For Freedom charity.