Signs of hope in Europe and in the world 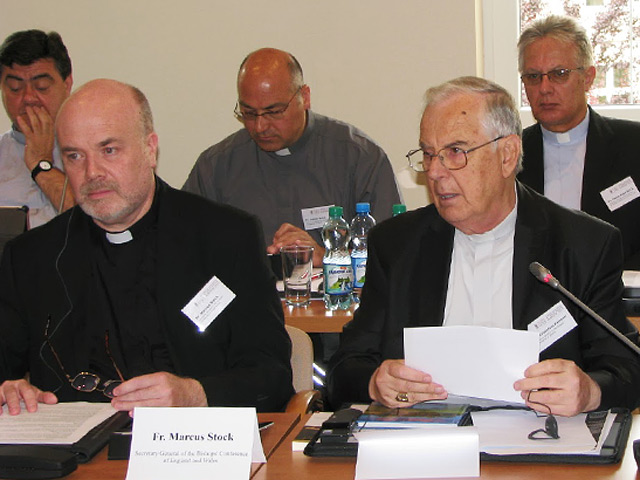 “Do not be afraid! The Gospel is not against you, but for you. Be confident! In the Gospel, which is Jesus, you will find the sure and lasting hope to which you aspire. Be certain! The Gospel of hope does not disappoint!” (Ecclesia in Europa, 121).

This message of hope given to the Church in Europe by Blessed John Paul II has brought to an end the 41st meeting of the Secretaries General of the Catholic Bishops’ Conferences who met in Warsaw, Poland, on 27 – 30 June at the invitation of the President of the Polish Catholic Bishops’ Conference (CEP) and Vice-president of the CCEE, Archbishop Józef Michalik, and the Secretary General of CEP, Bishop Wojciech Polak. The theme of the meeting was the new evangelization ten years after the Apostolic Exhortation Ecclesia in Europa, during the Year of Faith.

Lights and shadows in Europe. From Ecclesia in Europa to the Year of Faith: 10 years of new evangelization

In the last decade the world, Europe included, has suffered severe stress and sudden changes, which were not always desired, coherent, logical and credible. These are some points of the paper in which the Greek-catholic Bishop of Oradea (Romania), Mgr Virgil Bercea, has analysed the situation in Europe today. The disorientation that many social and cultural changes have brought about in the last ten years are, at the same time, cause and effect of some phenomena related to attempts at unravelling the culture of the family and the common good in favour of a purely self-centered, hedonistic and consumerist vision of human life. Although not belonging to the world, the Church is in the world and hence she is called to be a sign of God and therefore a sign of redemption and hope.

As Prof. Paul H. Dembinski, member of the Observatory of Finance of Geneva, pointed out, if we are to meet the challenges of today, we must not get stuck at an exclusively financial approach of life, according to the present-day orientation that tends to change human relationships into simple transactions and to seek for the effectiveness of finance, instead of the fruitfulness of human relationships and then only look at the present and forget about building the future. Bishop Juan Antonio Martinez Camino, secretary of the Spanish Bishops’ Conference, stressed the importance of looking deeper into the crisis, reminding us the words by Pope Benedict XVI: “the social question has become a radically anthropological question” (Caritas in veritate, 75). It seems clear, therefore, that the spiritual crisis plays a decisive role in the current European situation.

Europe, however, in addition to its economic and spiritual crises, is full of signs of hope, as highlighted in the reports of the secretaries.

A radical understanding of the New Evangelization

The summoning of a Year of Faith has paved the way to the implementation of events designed to awaken faith in all countries of Europe. It is important, however, as recalled by Msgr. Markus Stock, secretary of the Bishops’ Conference of England and Wales, for the Church to have a radical understanding of the new evangelization. To outreach those who are baptized but do not live their faith any longer, not only the Church urges Christians to go to meet people in our streets, but at the same time she invites us to be docile when listening to God so as to understand that He is the only answer to the deepest desire of the human heart. Several times, the witness of the martyrs of the twentieth century has been evoked to indicate that only a personal relationship with Christ, which becomes a cultural factor, is capable of promoting the evangelizing mission of the Church. The Church is called not so much to react but to be in the forefront in terms of ardour, methods and expression in presenting the always topical content of her faith: Jesus Christ.

The ‘One of Us’ campaign

Many bishops’ conferences have joined the initiative ‘One of Us‘, which aims at putting an end to the funding of activities which involve the destruction of human embryos in the fields of research, cooperation to development and public health-care. A sign of hope is represented by the mobilization of many citizens around this initiative testifying their interest in preserving life, even in its most vulnerable forms.

The Church in Poland

The presence of representatives of the Church coming from over thirty European countries was an opportunity for a deeper knowledge of the Church in Poland as she prepares to celebrate 1050 years of the Baptism of the Nation (966-2016). The new evangelization, the defence of life and the family, and the growing unemployment rate, are among the challenges the Polish Church has to face.

The secretaries were informed about the process that led to the historic signing by the Patriarch of Moscow, His Holiness Cyril, and the President of CEP, Archbishop Józef Michalik, of a common document, addressed to the Churches and the peoples of Russia and Poland in view of their reconciliation. In addition, participants have welcomed in prayer of thanksgiving the signing of a Joint Declaration paving the way to dialogue, forgiveness and reconciliation between the peoples of Poland and Ukraine, which was signed on June 28, on the occasion of the Seventieth anniversary of the Wolyn massacre, by leaders of the Church of Byzantine Rite and the Church of Latin Rite of the two countries.

There are also many signs of hope coming from the Church in other parts of the world, as witnessed by the Secretary of the Federation of Asian Catholic Bishops’ Conferences (FABC), Fr. Raymond O ‘Toole, and the Secretary of the Assembly of Catholic Bishops of the Holy Land, Fr. Peter Felet, who intervened as guest speakers. Despite the various difficult situations where Christians live, in which sometimes they are persecuted for their faith, the Church is everywhere a sign of hope, particularly appreciated for its indiscriminate charity in regions and situations which even for States are difficult to reach. Another sign of hope is the renewed enthusiasm shown by the Catholic laity in the Holy Land and in the FABC countries in fully assuming their Christian identity and their duty to bear witness.

During the meeting, the Secretaries of the CCEE and ComECE have also presented the activities of the two European bodies of Catholic bishops.

The meeting was marked by many moments of prayer and fraternity. In particular, the prayer vigil for Europe, animated by young Poles, has been particularly appreciated. The program of the vigil included the reading of some passages of the Apostolic Exhortation Ecclesia in Europa which were considered relevant and topical for today’s Europe. The meeting ended on Sunday, June 30, with a Eucharistic celebration presided by the Apostolic Nuncio, Archbishop Celestino Migliore, in the Cathedral of the Polish capital city, which we attended together with the local community.

The Council of European Episcopal Conferences (CCEE) includes the current 33 Bishops’ Conferences of Europe, represented by their Presidents, the Archbishops of Luxembourg and the Principality of Monaco, the Maronite Archbishop of Cyprus, the bishop of Chişinău (Moldova) and the Eparchial Bishop of Mukachevo. The current President is Cardinal Péter Erdő, Archbishop of Esztergom-Budapest, Primate of Hungary; the Vice-presidents are Cardinal Angelo Bagnasco, Archbishop of Genoa, and Mgr Józef Michalik, Archbishop of Przemyśl, Poland. The CCEE General Secretary is Mgr Duarte da Cunha. The Secretariat is based in St Gallen (Switzerland).