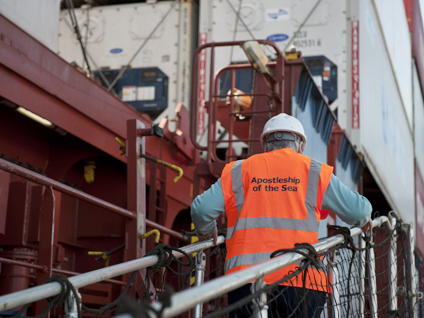 CBCEW » Agencies » Apostleship of the Sea » » Port chaplain comes to aid of injur...

A port chaplain came to the aid of a Filipino seafarer after he was injured on board a ship in Ipswich.

The seafarer fell from a ladder in the hold of a ship after being put to work on it immediately following his arrival from Manila.

He was rushed to hospital and Sister Marian Davey, Apostleship of the Sea port chaplain in East Anglia, was called to visit him.

“The combination of jet lag and limited food on the plane meant he was weak for the demanding work onboard.  Whilst working in the hold of the ship, he fell from the bottom of a ladder and injured himself.

“It remains a great concern that no consideration is given to a seafarer’s basic need for some recovery time when they make such long trips to join ships in Europe,” she said.

Sister Marian prayed with the seafarer and arranged for a priest to give him the sacrament of the sick.  She also gave him a mobile phone so that he could contact his family back home.

She also contacted the International Transport Workers Federation to ensure that he would be paid when he returned to the Philippines.

Sunday 8 July 2012 is Sea Sunday when Catholics are asked to remember and pray for seafarers and those who support them.

The Apostleship of the Sea, AoS, is a registered charity and agency of the Catholic Bishops’ Conferences of England & Wales and Scotland. It is wholly reliant on voluntary donations, grants and legacies to continue its work.

For more information visit Apostleship of the Sea or contact John Green, Director of Development on 020 7012 8607 or email.