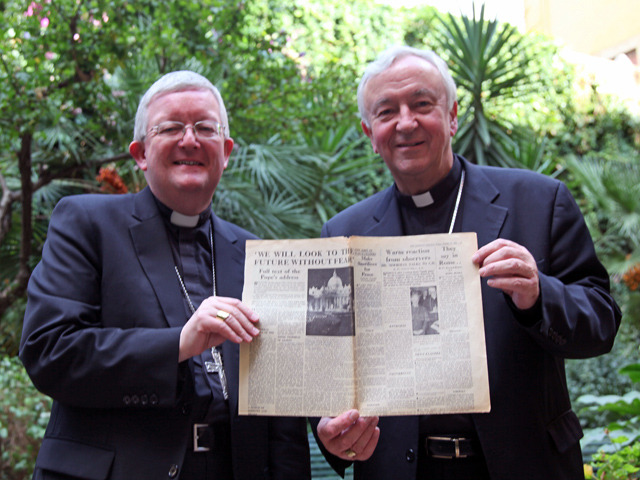 By Peter and Stella Jennings in Rome

The Mass was a deeply prayerful, inspiring, and at times emotional occasion which also marked the Opening of the Year of Faith, and the 20th Anniversary of the Promulgation of the Catechism of the Catholic Church.

From the top of the Bernini colonnade there was a spectacular panoramic view of the front of St Peter’s Basilica to the left, and of St Peter’s Square below, as the procession made its way out through the great Bronze Doors leading to the Apostolic Palace at the start of this historic event.

According to the Holy See Press Office, 80 Cardinals, 16 Council Fathers, eight Patriarchs of the Eastern Churches, 191 Archbishops and Bishops participating in the XIII Ordinary General Assembly of the Synod of Bishops, together with 104 Presidents of Episcopal Conferences from throughout the world participated in the memorable and unforgettable celebration.

His Holiness Bartholomew I, Archbishop of Constantinople, Ecumenical Patriarch (Turkey) who was seated near and to the right of the Holy Father, gave a special greeting before the Pope gave the final blessing at the end of the 2 hour, 20 minute celebration.

The First Reading was given in English, the Responsorial Psalm in Italian and the Second Reading was in Greek. The Gospel was proclaimed in Latin. The Prayers of the Faithful were said in Spanish, Chinese, Arabic, Portuguese and Swahili.

In what was a remarkable first, the Ecumenical Patriarch and the Archbishop of Canterbury, Head of the World-wide Anglican Communion, went up to the Papal Altar and exchanged the Kiss of Peace with Pope Benedict XVI during the Mass.

During his challenging homily Pope Benedict XVI said: “If today the Church proposes a new Year of Faith and a new evangelisation, it is not to honour an anniversary, but because there is more need of it, even more than there was fifty years ago.

“Recent decades have seen the advance of a spiritual ‘desertification’.  In the Council’s time it was already possible from a few tragic pages of history to know what a life or a world without God looked like, but now we see it every day around us.  This void has spread.

“It is in starting from the experience of this desert, from this void, that we can again discover the joy of believing, its vital importance for us, men and women.   “In the desert we rediscover the value of what is essential for living; thus in today’s world there are innumerable signs, often expressed implicitly or negatively, of the thirst for God, for the ultimate meaning of life.  In the desert, people of faith are needed who, with their own lives, point out the way to the Promised Land and keep hope alive.”

Pope Benedict added: “Living faith opens the heart to the grace of God which frees us from pessimism. Today, more than ever, evangelising means witnessing to the new life, transformed by God, and thus showing the path.”

The great bells of St Peter’s Basilica rang out loudly as Pope Benedict XVI was driven slowly in the Pope mobile through the waiting crowds of pilgrims in the piazza, as if taking the  message of the Holy Father, the New Evangelisation and the Year of Faith to the four corners of the earth!

Archbishops Vincent Nichols and Bernard Longley pictured in the garden of the Venerable English College, Rome, with a copy of the Catholic Herald of Friday, 19 October 1962 (from Peter Jennings’ archives) that contains reports of the Opening of the Second Vatican Council by Pope John XXIII (now Blessed) on Thursday, 11 October that year. Now, 50 years later Archbishop Vincent and Archbishop Bernard concelebrated at the Papal Mass on Thursday, 11 October 2012.