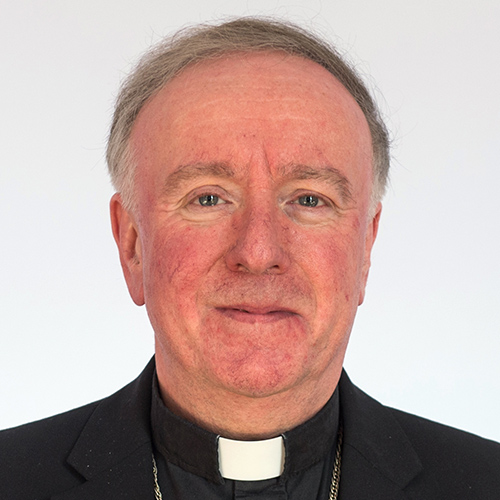 A profile of the Catholic Bishop of Portsmouth, the Right Reverend Philip Egan.

Bishop Philip Egan VG BA, STL, PhD was born at Altrincham, Cheshire. Educated at St. Vincent’s Primary School and St. Ambrose College, and a graduate of University of London (King’s College), he undertook his formation for the priesthood at Allen Hall, London and the Venerable English College, Rome, and was awarded his Licentiate in Sacred Theology (STL) from the Pontifical Gregorian University. Subsequently, he gained a doctorate in theology (PhD) from the University of Birmingham.

He was ordained to the sacred priesthood in August 1984 and served as an Assistant Priest at St. Anthony’s, Woodhouse Park (1985-8), before becoming assistant chaplain at Fisher House to the University of Cambridge (1988-91).

He was appointed Chaplain to Arrowe Park Hospital, Wirral (1991-4) before doing further studies at Boston College, Ma. For twelve years, he was on the formation staff of St. Mary’s College, Oscott, the major seminary in the Archdiocese of Birmingham, where he was the College’s Dean of Studies and Professor of Fundamental Theology. He returned to Boston College as a post-doctoral research fellow of the Lonergan Institute in 2007, before being appointed Parish Priest of Our Lady and St. Christopher’s, Romiley, near Stockport in 2008.

In 2010 he was appointed Vicar General of the Diocese of Shrewsbury and in 2011 a Prelate of Honour to His Holiness Pope Benedict XVI and in 2012 a Canon of Shrewsbury Cathedral.

Bishop Philip is frequently asked to speak at theological symposia and at catechetical gatherings and he has regularly contributed to religious journals and magazines. He has written about the thought of Newman and Lonergan and recently published Philosophy and Catholic Theology: A Primer (Collegeville, 2009).

Bishop Egan is a member of the Bishops’ Conference Department for Evangelisation and Catechesis.

For more, please visit the Diocese of Portsmouth’s website.