Ordination to the priesthood of Father David Doran 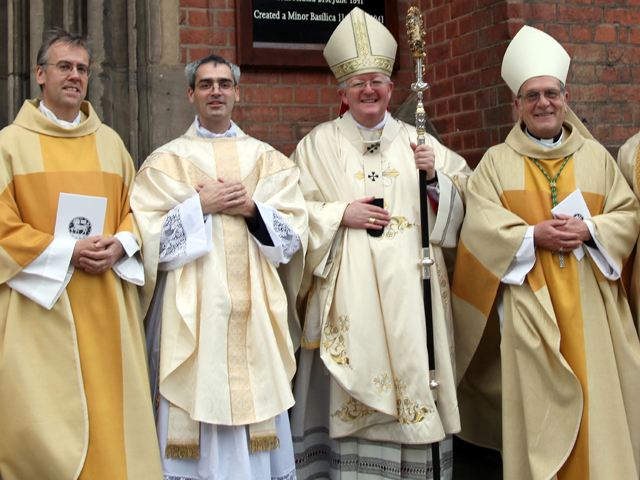 CBCEW » Vocation » Formation » » Ordination to the priesthood of Fat...

The Most Reverend Bernard Longley, Archbishop of Birmingham, presided and preached at the Ordination to the Sacred Priesthood of Father David Doran of the Archdiocese of Birmingham, on the Eve of the Epiphany, Saturday, 5 January.

Bishop David McGough, Auxiliary Bishop of Birmingham, Mgr Timothy Menezes, Vicar General and more than 20 priests, including visitors from Rome, concelebrated the Mass with the Archbishop at the Metropolitan Cathedral and Basilica of St Chad, Birmingham.

After the opening hymn, Corde Natus ex Parentis, “Of the Father’s heart begotten”, Archbishop Longley warmly welcomed Deacon David’s father, Mr Peter Doran, his family, friends and members of the several parishes and communities of religious sisters that had helped him on his long journey to the priesthood.

At the start of the Rite of Ordination, Mgr Nicholas Hudson, Rector of the Venerable English College, Rome, requested the Archbishop to ordain David Patrick James Doran as a priest.

During his homily Archbishop Bernard Longley said: “In his own characteristically thoughtful and thorough way David has chosen images to highlight some moments in the rite of Ordination and to adorn the Ordination booklet. But overall, on the front and back covers, it is the image of the Good Shepherd and the Lamb of sacrifice that captures the significance of this ceremony.”

Then a addressing his words directly to the candidate, the Archbishop of Birmingham, emphasised: “The Good Shepherd’s call is not partial or limited in time and scope and the gift you receive – a share in his priesthood – is irrevocable. He will give you the strength to walk the whole journey beside him and you will in turn be encouraged by his flock.

“When you are clothed in the vestments of a priest this is not a personal adornment for you, but it manifests to everyone the Lord whom you represent and it helps us focus on him alone.

“Always look out for the ones who are lost and lead them back to Christ especially through the Sacrament of Reconciliation – be patient with them and be their vision when they cannot see very far ahead.”

Archbishop Longley concluded: “Through your prayer, your love of the Scriptures and your priestly service conform your life day by day to our Lord so that others may recognise in you, his priest, the true image of Christ their Good Shepherd.”

Mr Peter Doran brought the Paten and Chalice, his gifts to his son, up to Archbishop Bernard Longley, who accepted them and handed them to the newly ordained priest kneeling before him. It was a poignant moment during a joyful, moving and memorable occasion enhanced by the choice of beautiful music and antiphons.

St Chad’s Choir was in fine voice and the antiphon Ecce Sacerdos, “Behold a great High Priest” sublime, as the solemn procession made its way in through the main entrance of St Chad’s Cathedral.

After Mass, several members of the congregation expressed their delight at being able to join in the singing of the familiar plainsong Kyrie, Sanctus and Agnus Dei, as well as the Litany of the Saints during the Rite of Ordination and the hymns.

Father David Doran celebrated his first Mass in St Chad’s Cathedral at 11am on the Feast of the Epiphany, before going back to Rome to complete his studies. He will return to the Archdiocese of Birmingham in the late summer when he will be assigned to a parish.