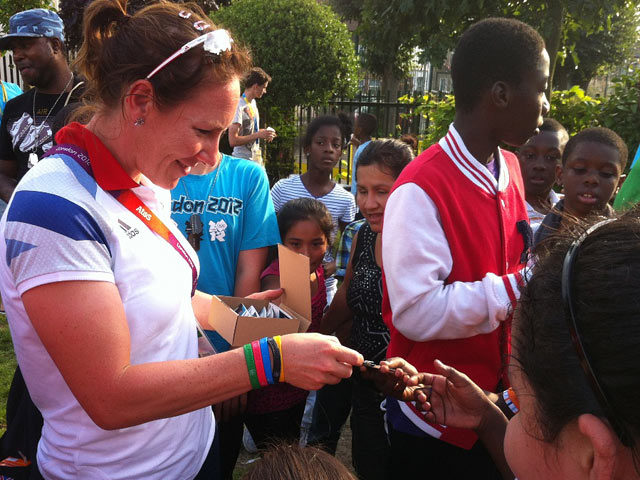 She met with over fifty young people aged between 7 and 11 at St Bonaventure’s School in the Forest Gate region of the Olympic borough of Newham.

Although only a mile away from the Olympic site, Flood was the only competing Olympian to take up the invitation offered to many athletes to leave the Olympic Village and spend time practically rolling out the 2012 Olympic motto to “inspire a generation” of local children to engage in sport.

The invitation was extended by The Joshua Camp, an international gathering of several hundred Catholic young adults from 21 countries worldwide who had assembled together to serve and engage with the East End community in particular throughout the Olympic Games.

Flood mingled informally with all of the children, who were made up of a variety of nationalities and religions. She spoke about “having to train two or three times every single day. Each session lasts 1½ hours so daily training is usually 4½ hours. We don’t get weekends off and we don’t get lie-ins. I only get three weeks holiday a year but I really enjoy doing my sport.”

Talking about the London Games, she shared that “being at the Olympics has been amazing. Sport and rowing are the gifts and ability that God has given me so I wanted to work at it and to be the best in my sport. I believe God put me into rowing to be a witness to him,” she said “and to be a Christian within our rowing team.

“All of you sat here today will have something you are good at,” she said. “It might be sport, it might be being an amazing friend, a really good listener, but you all have something God has given you. It is important that when you know what that is that you work hard at it and develop that talent.”

When asked about when she first started to row, she responded: “I loved running at school, and doing judo. I only tried rowing when I was 17 years old because somebody invited me to give it a go. If you get the chance to do something new then try it. You won’t know you are good at it until you try it. Whatever you start doing now, you will still have a head start on me.”

When asked why the crowds cheer those who have not won or who come last, Flood stated that “all the crowds have been cheering the British athletes, because even if you come last in a race you are still one of the best in the world and actually each person competing is the best person in their sport in their own particular country.” She added that “if you do the best that you can, and still aren’t the best in the world and may not have won, you are still the best you can be and the best in your country so this is something to be proud of.”

At the end of her time with the children, Flood distributed lots of free Olympic pin badges to the children and spend over 30 minutes signing autographs, posing for photographs and encouraging children individually in their sporting pursuits.

One girl present, Jasmine, aged 9, spoke to her mother as she left The Joshua Camp saying: “I love running and want to be a better runner. Please can you make sure I don’t watch too much TV as I want to be in the Olympics when I am older.”

Last Friday, Debbie Flood was one of the first-ever 2 recipients of the Eric Liddell Award, an award honouring one male and female athlete for outstanding character at home, in the community and on and off the field of competition. The award was presented to her and to American Olympic Decathlon gold and silver medallist, Bryan Clay, in London by Eric Liddell’s daughters, Heather and Patricia.

catholicnews.org.uk/catholic-2012
Our Olympic and Paralympic section

thejoshuacamp.com
For more information and images from The Joshua Camp

legacybreakfast.org
For more info about the Eric Liddell Award