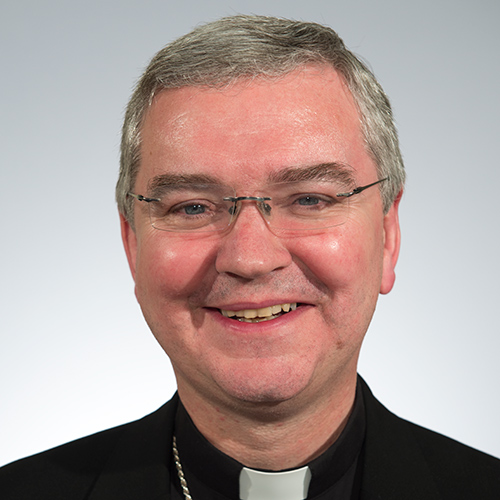 A profile of the Catholic Bishop of Plymouth, the Right Reverend Mark O'Toole.

Bishop of Plymouth, Archbishop of Cardiff and Bishop-elect of Menevia

The Right Reverend Mark O’Toole is the Archbishop of Cardiff and Bishop-elect of Menevia in persona episcopi.

Born in London on 22 June 1963, the youngest son of Marcus and Maura O’Toole who originally came from the Irish-speaking community of Connemara, Galway, Ireland, Archbishop O’Toole attended St Ignatius Primary School, Stamford Hill and St Thomas More Secondary school in Wood Green. He left school with four ‘A’ levels in 1981.

Archbishop O’Toole was ordained to the priesthood for the Diocese of Westminster on 9 June 1990 and was assistant priest in St Mary Magdalene parish, Willesden Green, for five years before being appointed Dean of Studies at Westminster’s seminary, Allen Hall.

From 2002-2008 Bishop O’Toole was Private Secretary to Cardinal Murphy-O’Connor, then Archbishop of Westminster.

In September 2008, he was appointed Rector of Allen Hall Seminary.

He was ordained Bishop of Plymouth on 28 January 2014.

On Wednesday, 27 April 2022, Pope Francis announced that Mark O’Toole will become the eighth Archbishop of Cardiff in succession to Archbishop George Stack. The installation will take place in Cardiff Cathedral on 20 June 2022, the feast day of Welsh martyrs Saints Julius and Aaron.

Archbishop O’Toole is the Chair of the Department for Evangelisation and Discipleship.

For more, please visit the Archdiocese of Cardiff‘s website.