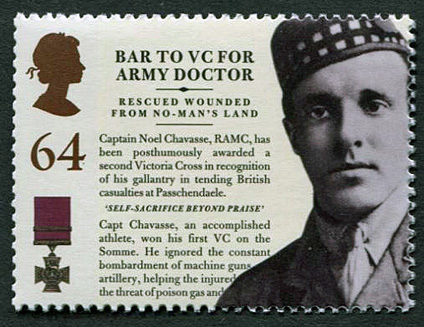 “The trials and triumphs of life will win us the unfading crown of glory given by God alone” Fr Paul Chavasse, Vice-Postulator of the Cause for the Beatification of Blessed John Henry Newman

The Chavasse twins, two famous English brothers, accomplished athletes and both Oxford Blues were selected to represent the United Kingdom in the 400 metres at the London 1908 Olympic Games. They gained no medals.

One of them, Captain Noel Chavasse VC and Bar, was shown on a Royal Mail stamp included in the 150th Anniversary of the Victoria Cross issued on 21 September 2006. The engaging stamps were printed setenant, as horizontal pairs.

The wording on the 64p Chavasse stamp is as follows:

“Bar TO VC FOR ARMY DOCTOR. Rescued wounded from no-man’s land. Captain Noel Chavasse, RAMC has been posthumously awarded a second Victoria Cross in recognition of his gallantry in tending British casualties at Passchendaele.

“Capt. Chavasse, an accomplished athlete, won his first VC on the Somme. He ignored the constant bombardment of machine guns …. artillery, helping the injured …. the threat of poison gas and… ” the rest of the wording on the stamp is obscured by a fine picture of Capt. Chavasse.

A distant cousin, Fr Paul Chavasse, former Provost of the Birmingham Oratory 1992-2010, Vice-Postulator of the Cause for the Beatification of Blessed John Henry Newman, said: “I was delighted when Royal Mail issued a stamp commemorating the bravery of my cousin, Noel Chavasse. In this year when the London Olympic Games has captured the imagination of our country, I am proud to remember how Noel and his brother Christopher took part in the London Olympics of 1908.

“During these weeks of the Games, the focus of attention is on the gold medal winners. Noel and Christopher Chavasse did not win a medal at their Games. It is good to remember that taking part in the Olympic Games is a great achievement on the part of each of the athletes and we can be proud of every member of Team GB.”

“As Catholics and Christians, let’s remember most of us go about our daily work in a way unrecognised and unknown by the outside world. The Oratory’s founder, St Philip Neri, recalled that for us it is persevering to the end through the trials and triumphs of life that will win us the unfading crown of glory given by God alone.”