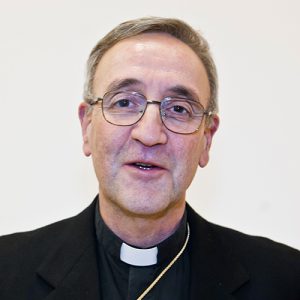 A profile of the former Apostolic Nuncio to Great Britain, His Excellency Archbishop Antonio Mennini.

His Excellency Archbishop Antonio Mennini was born on 2 September 1947 in Rome and served as the Apostolic Nuncio to Great Britain from March 2011 – January 2017.

He received Priestly Ordination on 14 December 1974 and obtained a Doctorate in Theology from the Pontifical Lateran University. He then worked as an assistant priest in the Diocese of Rome before entering the diplomatic service of the Holy See in 1981 and served first at the Pontifical Representations in Uganda, then in Turkey, and subsequently in Rome at the Council of Public Affairs of the Church of the Secretariat of State, which is today called the Section for Relations with States of the Holy See.

On 8 July 2000, Pope John Paul II nominated him as Titular Archbishop of Ferento and Apostolic Nuncio in Bulgaria. He received Episcopal Ordination in Rome on 12 September 2000 and was involved in the Apostolic Visit by Pope John Paul II during his time there.

He remained in Bulgaria until 2002, when he was transferred to the Russian Federation as Representative of the Holy See and, from 2008, as Apostolic Nuncio to Uzbekistan.

In December 2009 full diplomatic relations were established between the Holy See and the Russian Federation and Monsignor Mennini became the first Apostolic Nuncio to the Russian Federation. On 13 February 2011 President Medvedev awarded him the ‘Order of Friendship’ for his contribution to Russian-Vatican relations.

Archbishop Mennini was nominated as Apostolic Nuncio to Great Britain on 18 December 2010 and began his mission in London on 21 February 2011.

He presented his Letters of Credence to H. M. Queen Elizabeth II on 2 March 2011.