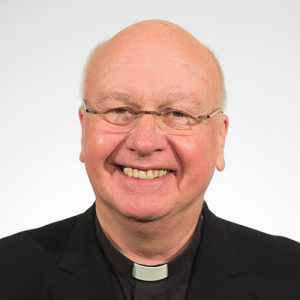 A profile of the Catholic Emeritus Archbishop of Southwark, the Most Reverend Kevin McDonald.

The Most Reverend Kevin McDonald is Archbishop Emeritus of Southwark.

Born in Stoke-on-Trent on 18 August 1947, Archbishop McDonald was ordained to the priesthood in 1974.

He worked as an official at the Pontifical Council for Christian Unity in Rome from 1985 until 1993, where he had special responsibility for Anglican and Catholic relations. During that time he also completed a doctorate.

He was ordained Bishop of Northampton on 2 May 2001 having previously served as Rector of Oscott College from 1998 to 2001.

He was Installed Archbishop of Southwark on the Feast of the Immaculate Conception, the patronal feast of the Archdiocese, on 8 December 2003 and served until 4 December 2009 when Pope Benedict XVI accepted his resignation on health grounds.