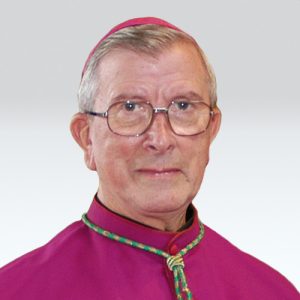 A profile of the late Catholic Bishop Emeritus of Liverpool, the Right Reverend Vincent Malone.

The Right Reverend Vincent Malone was Bishop of Liverpool from 3 July 1989 to 26 October 2006. His resignation as Auxiliary Bishop was accepted shortly after his 75th birthday, but he continued in his roles as Vicar General and Trustee of the Archdiocese until 2019 and as Canon of the Metropolitan Cathedral Chapter until his death.

He was born in Liverpool on 11 September 1931. At the age of eighteen, he went to St Joseph’s College, Upholland to study for the priesthood and was ordained in his home parish of St Oswald, Old Swan on 18 September 1955.

He served as Chairman of Liverpool’s Archdiocesan Council of Priests, Northern Regional Coordinator for the 1982 Papal Visit, Deputy Speaker of the Merseyside and Region Churches Ecumenical Assembly and Chairman of its Standing Committee. In 1981 he was appointed to be a member of Archbishop’s Council, on which he still serves today.

He was ordained as Titular Bishop of Abora and Auxiliary Bishop of Liverpool by Archbishop Worlock in the Metropolitan Cathedral of Christ the King, Liverpool.

He served as Chairman of the Bishops’ Conference Committee for Higher Education and as Episcopal Liaison for the National Board of Catholic Women.

Bishop Malone died on the morning of Monday 18 May 2020 at the Royal Liverpool Hospital.  He was admitted to hospital after testing positive for COVID-19 a week earlier.