Fr Damian Howard SJ, the Provincial Superior of the Jesuits in Britain, has recorded a message about Father Stan Swamy - a Jesuit priest and human rights activist imprisoned in India.

Fr Damian Howard SJ, the Provincial Superior of the Jesuits in Britain, has recorded a message about Father Stan Swamy – a Jesuit priest and human rights activist widely known for his dedicated work with marginalised Dalit and Adivasi communities in India.

On 26 April, Fr Swamy marked his 84th birthday in prison after 200 days of incarceration. He was detained under anti-terror legislation on charges that the local church, the UN and human rights groups have described as completely unfounded.

There is growing concern for Fr Stan’s health – he has Parkinson’s among several other conditions. His latest bail plea, on grounds of ill-health, was rejected on 22 March.

My name is Damian Howard, I am the Provincial of the Jesuits in Britain, and it’s a great pleasure for me to talk to you today about Father Stan Swamy.

I’m guessing that you don’t know Father Stan. He’s not a well-known person in the Church or indeed society. He’s a man who’s spent decades working for excluded minorities in India. But today he finds himself in real difficulty and I want to share with you some of the situation that he’s in.

His work, as I say, has been with excluded people in India. India is a great country, it’s full of wonderful people. But what’s going on at the moment is problematic. Christian minorities and Muslim minorities are both being treated badly by the Indian government.

Father Stan has spent his life defending the minorities of Christians and others, people who are excluded and treated in the most appalling ways. And I think it’s that work that he’s been doing, that commitment to the poor and excluded that’s got him into trouble. He’s been put in prison charged with offences of terrorism and is being treated in a very poor way. He’s being kept in very bad conditions.

We Jesuits, and those of us who want to support the people that Father Stan has stood in solidarity with all these years, we want to appeal to you to do what you can to support him in his hour of need. You can do that by taking an interest in his situation – becoming aware of what he’s going through. Perhaps you might like to look at the Jesuit Missions website, where you will find the latest details about what’s happening to him.

You can pray for him, please, and for those he works with. And by all means, spread this video and others on social media so that others can take part in the campaign to set him free and to bring him the justice that he deserves.

India, as you know, has a caste society – a society in which people are born into a particular place in the social set up. And within that, you have people in the high caste and low caste.

Those who are excluded even from the caste system, find themselves utterly excluded from society, forced into very difficult sorts of employment, forced to live in parts of the country where no one else wants to live. Those groups, we call them by various names, they’re often called Dalits. Often they have converted to Christianity or Islam or some other religion in order to liberate themselves from some of the more negative consequences that they face as people excluded from the system. And the Jesuits have now for many, many years been committed to struggling for their rights, for the dignity of people who face the most extreme forms of exclusion.

Father Stan is one of many Jesuits who have lived their lives associated with those people, struggling for their dignity and their human rights. That’s the situation that he’s been involved in.

What we’re asking for here, I mean, obviously, the idea would be the release of Father Stan, but perhaps something a little more realistic would just be that awareness of the fact that this is a matter of human dignity, not just to Father Stan, but for for those people he’s struggling to give a voice to when they don’t have one…

That’s absolutely right. An accusation has been made and a legal processes in place and whatever I and others may think about the justice of that, I mean, it’s perhaps right that we should go through the legal processes, but to take an 83 year old man and to deny him his dignity, to put him in a situation where he’s totally isolated, is clearly just wrong.

We are anxious that his rights should be observed and that the Indian government should should take care of him – something they would offer to any other citizen. 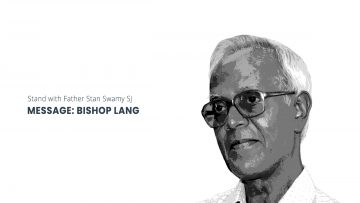 Bishop Lang assures Fr Stan Swamy he is not forgotten 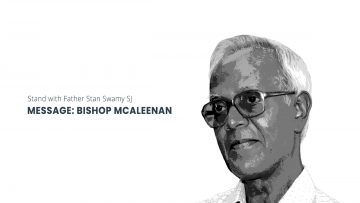 Listen to the voice of justice and release Fr Stan Swamy. 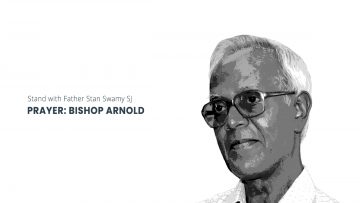 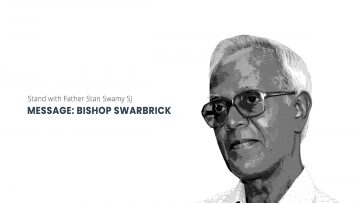