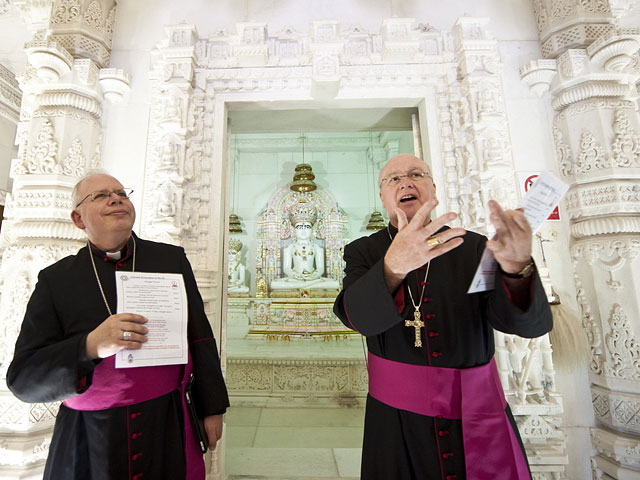 Archbishop Kevin McDonald, Chair of the Bishops’ Conference Office for Relations with Other Religions, enjoyed a warm welcome from the Jain community during a recent visit to the Oshwal Centre near Potters Bar (16 May 2012).

The Jain community, represented notably by Mr Nemu Chandaria, Chairman of the Institute of Jainology, and Mr Tushar J Shah, President of the Oshwal Association received a delegation from the Catholic Church including Archbishop McDonald, Bishop Paul Hendricks, the current and former directors of Westminster Interfaith, Jon Dal Din and Alfred Agius respectively, as well as Katharina Müller, the interreligious adviser to the Bishops’ Conference.

This meeting between Jain and Catholic representatives on the outskirts of north London was, in part, thanks to the strong links between the Jain community and the Holy See, which has led to two meetings with representatives from the Pontifical Council for Inter-religious Dialogue – the second as recently as December 2011.

In his speech, given to an audience that was made up of Jain dignitaries, interfaith representatives and Catholics from the local parish and secondary school, Archbishop Kevin McDonald said:

“A visit such as this is a sign of the times, and a sign of changed times, a time in which friendship and good will between the religions is not only important, but necessary”. He stressed the importance of good relations “for social harmony and for peace, both locally and in the wider world”.

Mr Tushar J Shah affirmed that “Jains embrace the philosophy of community cohesion” informed by the central principles of Jainism: Ahimsa – non-violence, and anekantvad – the awareness that the truth has many different sides.

Archbishop Kevin McDonald and his team were treated to a tour of the derasar – temple – by Mrs Arshna Sanghrajka, who pointed out the symbolism of the gardens and the temple itself, including the symbol perhaps most associated with the Jain faith, the open palm. It symbolises the assurance that no harm is meant and, secondly, gives a warning to stop and think before taking any action. The wheel in the centre of the palm has twenty four petals indicating twenty four founders, tirthankaras, and encloses the word Ahimsa, non-violence.

The Oshwal community, which raised the funds from within the community to build the derasar in the grounds of the centre in 2005, originates from a village called Ossiya in the Jodhpur District of India.

Different waves of emigration, starting in the 11th or 13th century, have made sure that it is now a world-wide community. Today, there are estimated to be more than 25,000 members of the community in the UK. After the tour and speeches, all attendees shared a Jain vegetarian lunch – the principle of non-violence also means that Jains avoid eating any foods that may cause or may have caused harm to other beings. This gave the opportunity for lively and informal exchanges, which continued the atmosphere of friendship and mutual inspiration that shaped the visit as a whole.

flickr.com
Images can be found on our Flickr photostream

oshwal.co.uk
Information on the Oshwal Centre

jainology.org
Pictures and a report on the meeting between the representatives of the Jain community and of the Pontifical Council for Inter-religious Dialogue.

A Jain perspective on the day