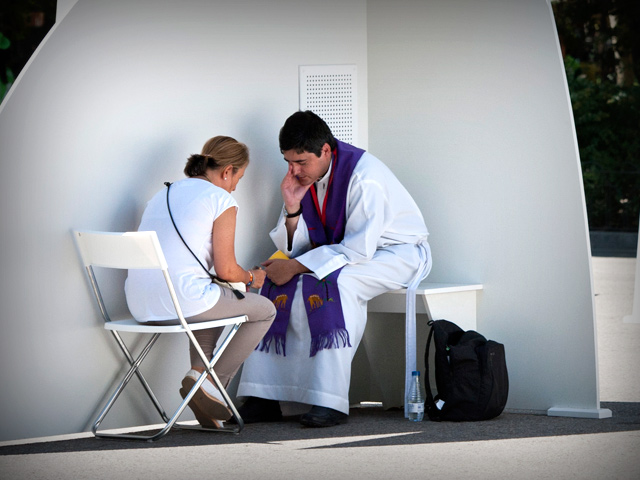 The Light is ON for YOU this Advent!

The Diocese of Lancaster is planning to hold its fourth ‘The Light is ON for YOU!’ campaign this Advent to encourage inactive or ‘lapsed’ Catholics to return to Church through the Sacrament of Reconciliation – or Confession as it’s commonly known. The initiative also encourages Mass-going Catholics to avail again of God’s mercy through the sacrament.

Parish churches throughout the Diocese will be open for prayer between 7 – 8pm on each Wednesday night of Advent 2013 (4 December, 11 December and 18 December) so that priests can hear confessions.

The Bishop of Lancaster, Rt Rev Michael Campbell OSA as he launches ‘The Light is ON for YOU!’ campaign this Advent, has been encouraged by Pope Francis’ recent words on the importance of approaching confession with confidence and simplicity.

“The Holy Father Pope Francis reminds us: ‘The Lord never tires of forgiving: never! It is we who tire of asking his forgiveness.’ He has also invited Catholic parishes to: ‘Open the doors of the Church, and then the people will come in… if you keep the light on in the confessional and are available, then you will see what kind of line there is for confession.'”

“It’s true – where the Sacrament of Confession is preached about thoroughly, well-advertised and made available at popular times together with good catechesis – even with demonstrations about how to make a good confession – the results can be quite significant.”

“I was particularly struck by the observation of one priest who has taken part previously in The Light is ON for YOU! about the return of lapsed Catholics to confession, when he said ‘“I think very often those who have been away from the Sacrament for a long time are very often surprised and delighted to find it such a positive and affirming experience.’” My hope is that this Advent many more Catholics will receive Christ’s healing through this marvellous Sacrament”.