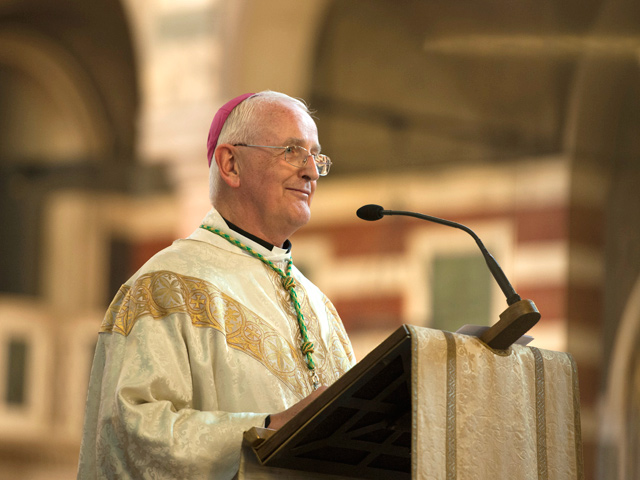 Bishop Tom Burns of seafarers’ charity, the Apostleship of the Sea has underlined the role the charity has of speaking out for seafarers who have been ill treated. On the eve of the feast of Our Lady Star of the Sea, Bishop Burns hailed the important work of the charity at a Mass in Westminster Cathedral on Wednesday 25 September.

Bishop Burns noted that abuse, when it occurs in the shipping industry has its roots in a spiritual crisis:

He noted that there are some in the maritime industry who “exploit the poor and the humble, where God-fearing people are unable to speak out for fear of losing their jobs, where abuse goes unreported, where wages go unpaid.”

In this environment Bishop Burns paid tribute to the chaplains and volunteers of the Apostleship of the sea who “have to walk a delicate line between championing the cause of the underdog, as well as being the voice of the voiceless, and yet you must also try to avoid making matters worse by understanding the difference between intervening and interfering.”

Despite the difficulties and challenges facing the work of the charity, Bishop Burns quoted the Lutheran Pastor, Dietrich Bonhoeffer, who on the eve of his execution by the Nazis declared ‘The Victory is certain!’. He continued that “those who work with seafarers see that victory in the eyes and smiles of every seafarer they meet. They re-assure him that whenever he leaves port, Christ leaves with him, in his heart.”

The Apostleship of the Sea, AoS, is a registered charity and agency of the Catholic Bishops’ Conferences of England & Wales and Scotland. It is wholly reliant on voluntary donations and legacies to continue its work.

For more information contact John Green, Director of Development on 020 7012 8607 or email johngreen@apostleshipofthesea.org.uk