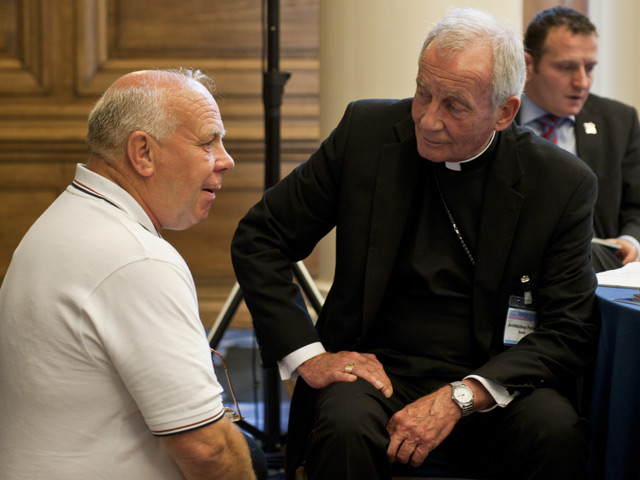 Just weeks before the 2012 Games in London, the Catholic Church in England and Wales has held an international conference and a national day dedicated to disability to demonstrate and witness in the words of John Paul II that “the body has the ability to manifest God’s deepest whisper”.

The conference, entitled EveryBody has a Place, and the national day called ‘Now is the time to be friends’ set out to explore and celebrate the gifts of all people while offering theory and practice in the context of the topics of disability, theology and sport.

The Central London conference was attended by 160 people including people with disabilities and their families, professional staff, academics, clergy and religious and people from all denominations interested in the centrality of disability in the Christian experience.

The Archbishop of Southwark, Peter Smith, opened the conference and each speaker affirmed the unique place of every body in creation. Speakers included Professor John Swinton from the University Aberdeen, Drs David Jones from The Elizabeth Anscombe Centre for Bioethics and Pia Mathews from St John’s Seminary Wonersh. The conference was joined by representatives of the Knights of Columbus from America, who provided insight to their work in Haiti with physically disabled people and their sponsorship of the Haitian amputee football team, Team Zaryen.

Baroness Shelia Hollins provided practical insight both as an eminent professional in the field of disability and also as a parent of a disabled child as she spoke about her project Books beyond words and sport. Paralympian Stefanie Read recorded her testimony for the conference and a brief excerpt from the inspiring Paralympic resource Undefeated was also shown, produced by the Baptist Missionary Society.

The afternoon concluded with presentations from Andy Reed OBE from the Special Olympics Association, who brought the whole scope of the Olympic Games to this interesting and insightful day.

As the opening keynote speaker, Professor John Swinton of the University of Aberdeen spoke of the need to provide people with a place of belonging. “Inclusion is no longer enough”, he said. “To be true to the Gospel means ensuring that everyone has a place where they belong and are not merely included, where they are welcome at the heart of a community, where they are appreciated and deeply missed when not present.” He spoke of the Church needing to own and promote a new way of approaching the disabled person, rejecting the traditional approach of piety that focuses on a person’s vulnerability.

The Knights of Columbus, a Catholic men’s organisation from the USA who helped to sponsor the event, premiered their film Healing Haiti’s Children. It showed how football is being used to help adults and children in Haiti affected by the hurricane in January 2010 to regain social status in one of the world’s poorest countries where being disabled has previously carried a social stigma. Many of Haiti’s now hundreds of amputees have used the challenge of losing an arm or leg as a positive statement to give back to society and to show that facing adversity can bring long-term benefits for everyone.

Theologian Dr Pia Matthews broke open John Paul II’s Theology of the Body explaining its relevance not only to the Paralympic experience but also to that of everyday ordinary people. She mentioned two concerns expressed by the decesased Pope. “Modern people, the abled as much as the disabled, no longer identify themselves subjectively with their bodies. It is as if the ‘hero’ self is imprisoned in matter and the body is the problem and so becomes an object to be manipulated.” And secondly, “the human tendency is to make the other into an object for me, forgetting or simply not seeing that the other is ‘an other’, a Christ. It seems that the profoundly disabled are more likely to be seen as ‘an object’ on several accounts.” She went on to say that “some build shells to protect themselves others. Others cannot mask their loneliness by strategies and so either way there is loneliness that seeks companionship but runs the risk of added loneliness when companionship does not materialise or when it ends up being another objectivisation.”

Cristina Gangemi, disability consultant to the Catholic Church in England and Wales, called the Paralympics a Christological event. “The Paralympics show us what Christ asks all of us to do,” she said, “to see a person regardless of their human form in all its potential and placing that person into a society in which the disability disappears. The Paralympics enact the Theology of the Body written by John Paul II, who was himself a great sportsman. He was always in shape, firmly disciplined, and allowed the Spirit to guide him in sport. He also demonstrated, experiencing firsthand the physical disability, that there is continuity between health and illness and that the body must be respected and honored at all stages.”

A day dedicated to disability then took place at Aylesford Priory, the Carmelite monastery in Kent. In previous years the day was organised for the Archdiocese of Southwark. This year the day has been organised by a joint committee made up of diocesan disbility consultants, Faith and Light, HCPT and others engaging with those with disabilities. Hundreds of people attended from across the country, about half of whom were themesleves disabled, with the focus being on the human person in its full diversity.

The day was for the most part led by people with disabilities and included sports and arts, music, prayers, and finally, the celebration of the Mass celebrated by Bishop John Hine. He spoke of the need for everyone to recognise that Christ, the Messiah, is present in a tangible way and therefore to be honoured within their neighbour.

The opportunity was taken towards the end of the day to thank Jean Vanier, founder of L’Arche, which inspired much of the work being done today with those who are disabled.

Aside from theory and practice, great graces have been experienced through these new ventures. Julie Henry, who prepared and led the music for the national day, was herself very recently in a coma. Her daughter brought some holy water to her hospital bed and soon she was awake and speaking to doctors saying: “I still have to lead the music at Aylesford. It is on my heart and my goal is to be well and to be there.” She led an amazing day of liturgical music and playful celebration.

One person wrote from their wheelchair of the effects both events are having on her life: “I know now that my journey must become more embodied, more disciplined, and committed in walk with God, both physically and spiritually. I know He wants to teach me about nurturing, honouring, celebrating and sharing the body He has gifted to me. Even in the last few days, this new understanding has given rise to a willingness to risk giving up my pride, my self-sufficiency, and my envy, and to share more honestly and vulnerably with my friends and with God all my hopes, my fears and my dreams. I even plan to join a local gym in the next week too.”

Both days were characterised by the commitment of all those present to continue working together to build a just and fair society, but where more significantly people with disabilities are not just included, but where they feel they truly matter and wholeheartedly belong.

We have a set of images on our Flickr Photostream.