Catholics in Wales “enormous resource of care and compassion” 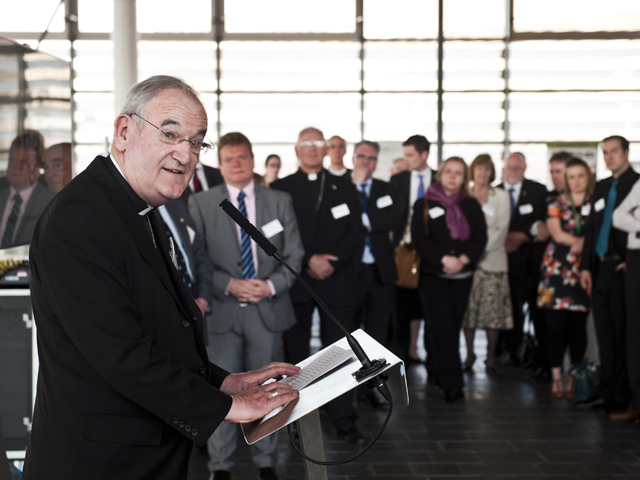 The Most Rev George Stack, Archbishop of Cardiff, has told members of the Assembly of Wales that the country’s 30,000-plus Catholics make an enormous contribution to society as a resource of “care and compassion”.

“I love the phrase which says ‘There are no such people as strangers – only friends who have not yet met’. And that has certainly been my experience since coming to Wales. The experience too of the relationship between the Catholic Church and the Welsh Assembly.

“Everywhere you go in the principality you will find Catholic Dioceses and parishes reaching out into to the wider community in partnership with statutory and voluntary organisations. More than 30,000 Catholics go to church every Sunday. They are an enormous resource of care and compassion. That is just one reason why we have been able to give £20,000 over two years to set up and be part of the foundation of Cardiff Citizens UK. This commitment arises from what Pope John Paul II called ‘…the threefold cornerstones of dignity, solidarity and subsidiarity’.”

Archbishop Stack went on to point to the challenges laid down by Pope Francis in the early days of his papacy:

“One of the last letters written by Pope Benedict was called ‘Charity is at the heart of the Church’. I don’t think it is an exaggeration to say that the whole world is watching to see how Pope Francis is going to put that into action. Especially after his challenging statement when he became Pope that ours should be a poor church committed to the poor.”

The Catholic Bishops’ Conference of England and Wales organised the reception and was represented by the bishops of the three dioceses in Wales and representatives from its aid, development and domestic social action agencies.

Read Archbishop George Stack’s introduction to Assembly Members at the Senedd by using the link in the top right-hand corner of this page.