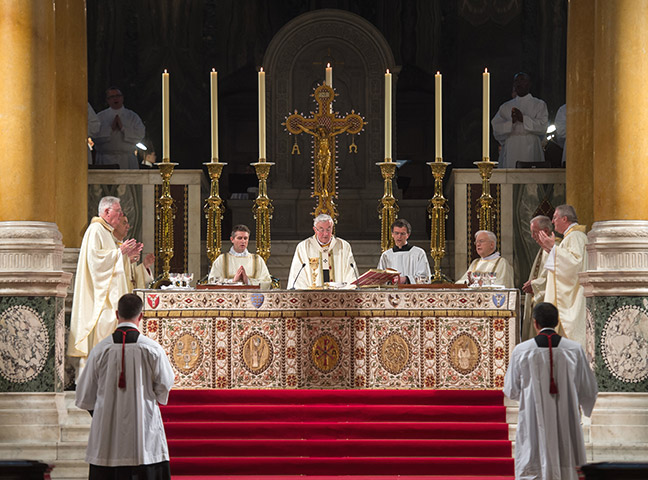 Church » Forces » World War I » » Cardinal prays for casualties of Wo...

Cardinal Vincent Nichols has celebrated a Requiem Mass for the Fallen of the First World War.

The Mass took place at Westminster Cathedral at 5.30pm on Monday 4 August, on the centenary of the start of the war.

One hundred years ago today, in the first week of August, people were enjoying a Bank Holiday Monday. For many that did not mean much, as poverty levels were high, sickness common-place and pressures on most families really intense. There were tensions underlying daily life, too, with employment conditions often harsh and conflictual and the question of Irish independence fiercely in the forefront of much political activity. Nevertheless, it was a Bank Holiday and as one of our priests, Fr Timothy Ring of Commercial Road, wrote:

“Life’s course was flowing on, in its normal placidity. Excursions and holidays were uppermost concerns. Yet by the end of the week all Europe was ablaze and the cry ‘to arms!’ was being shrieked everywhere.”

Events far away did not seem too important: not the assassination of Archduke Ferdinand on 28 June, nor the Austrian ultimatum to Serbia delivered on the 24 July. But when Luxembourg and Belgium were invaded in the first days of August everything changed and by 11.00pm on 4 August 1914 war was declared.

The invasion of Belgium was shocking indeed. Our Diocesan Treasurer, Fr Maurice Carton de Wiart, a Belgian himself, went quickly to his home country with a party of nurses. He witnessed, first hand, atrocities in the ‘rape of Belgium’ and was confronted in his own town by rampant German soldiers. His reports, and those of the nurses, were printed here in the Westminster Cathedral Chronicle. The crisis was dire. In due course there came from Belgium an ever-widening steam of refugees, a quarter of a million, crossing the Channel to England where they received a warm and responsive welcome.

Yet no matter how horrific these events were, no one could have imagined that in the following four years over ten million soldiers would have been killed as well as many millions of civilians. It is for them all that we pray this evening, in this Requiem Mass. We include in our prayers the two million German soldiers who died. We give special place to the million soldiers who lost their lives in the ranks of the British forces. Among those ranks were Australians, Canadians, South Africans, New Zealanders and Indians, not forgetting the numbers of Irish men who volunteered to fight, too.

This evening we salute their sacrifice. We commemorate their heroism, their loyalty, their bravery often in utterly impossible circumstances of horror and helplessness. And, in our Catholic tradition, we pray for them. We pray for the repose of their souls in the peaceful presence of God and we pray for the coming of that final resurrection when they will rise again, from every horrendous grave, to live for ever in the glorious presence of God. This is our faith. This is the faith of the Church. We are proud to profess it, especially on this solemn day.

This evening we also remember the thirty seven priests of the Diocese who served as chaplains, often at the urging of Cardinal Bourne. Some of them have given us vivid accounts of their work and of the reality of this war.

One of them, Mgr Bickerstaffe-Drew, was with the very first British Expeditionary Force which went immediately to France. He wrote about his task of burying the dead, both British and German young men in ‘bare, brief, simple and almost silent moments’. He wrote about his growing cooperation with Chaplains of other denominations, the first beginnings of practical ecumenism.

Another of our priests, Fr Lancelot Long who served with the Royal Field Artillery, wrote about the profound goodness of so many of the troops who, he said, ‘practised many of the Christian virtues and some in an heroic degree.’ He also wrote about the experience of the front line: ‘One remembers the wounded coming in, the smell of gas, the streams of blood, the piteous cries for water, the shrieks of men as their wounds were dressed, and the silent bodies awaiting burial.’ His words remind us only too vividly of the horrors of this war and the enormity of its cost.

Mgr Bickerstaffe also wrote about one celebration of Mass he held in a medieval barn, once the property of the Knights Templar, on a French farm in 1914. I quote:

“It was really impressive: the great dim barn, the crowd of soldiers crouched in the hay, the enemy’s guns booming three miles off and the thought that once again, after 500 years, Mass was being said in the old place of religion, by a foreign priest, belonging to a foreign army, for foreign soldiers.”

He spoke of the piety of the men as they faced their fate. Our Mass this evening is the same event, the same mystery of Christ being celebrated, the same source of strength and comfort. In offering this Mass, then, we are again united to all those who knelt in that barn in 1914 and in so many other battlefield moments of prayer and celebrations of Holy Mass.

They too, like us, may have heard the consoling words from the First Letter of St John, with its wonderful vision of sacrifice: ‘This has taught us love – that he gave up his life for us; and we, too, ought to give up our lives for our brothers.’ They lived those words in ways that we do not. We salute them, we commemorate them. We pray for them today that they have indeed ‘passed out of death and into life.’

Why did this Great War take place? There is no single, simple account. There was a single event that served as a spark: there were competing and threatened identities, not least of the great powers; there were deep determinations to preserve established power blocks; there were troubled leaders who had their eyes on more domestic issues.

We recognise today these same patterns. We know how vulnerable and precarious are many situations in our world today. So we continue our prayer, our prayer for peace, in Syria, in the Holy Land, in Libya, in the Ukraine, in Africa, in so many places. We remember again that violence always provokes violence and we beseech all those in power to seek always the ways of peace.

The Gospel passage we have just heard calls us to recognise that there will be trouble within our human family and yet that those very conflicts can be the birth pangs of new life. Let us pray that this will be so. Let us pray that the King of Peace will truly reign in our hearts and that the commemoration and prayer we hold tonight may contribute to a new beginning in which, by the grace of God, we live in peace. Amen.

NEWS
The First World War is Part of Every Family DNA, says Bishop of the Forces