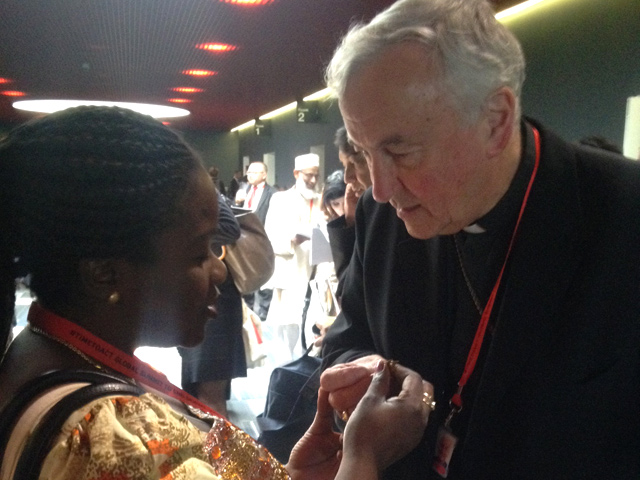 Cardinal Vincent Nichols today addressed the Global Summit to end sexual violence in conflict, congratulating the Foreign Secretary and all involved for their dedication to this crucial cause.

The Cardinal, speaking on a panel focussing on the role of faith leaders and communities, made three points regarding the moral and religious framework which could strengthen the struggle against sexual violence in conflict.

The Cardinal’s first point was the clear principle that every human activity is subject to moral principles and judgment, even in war, if it is not to lose its truly human character. “And sexual violence is always a crime; it is always an immoral act,” he said.

The second point highlighted that the exercise of human sexuality is something that touches the deepest aspect of our identity and personhood. A fundamental aspect of the Church’s teaching is that sexual acts, with their capacity to unite two people, body and spirit in an act of self-giving that has within it the call to a permanent commitment between them and which is, of its nature, open towards the creation of new human life, must always take place within the context of authentic freedom. There is no place in sexual relations for brutality, aggression or any kind of de-humanisation of a person.

“The Church wholeheartedly backs every initiative to prevent sexual violence being perpetrated against anyone, anywhere and under any circumstances,” he said, saluting the work of Religious Sisters across the world, along with many others, who have dedicated themselves for decades to this work.

The Cardinal’s final point was that the dignity of each person is inherent in herself or himself, within their nature and that nature is most clearly understood as deriving from its creator; from the mystery of God. In this God-given dignity the right to life itself and the right to bodily integrity are fundamental and so any violation of that bodily integrity is a fundamental denial of human dignity.

The Cardinal concluded with assurance of his full support to the aims of the conference, stating that “Sexual violence as an instrument of warfare and conflict is a deep wound on the body of humanity”.

You can read/download the Cardinal’s full address by using the link in the top right-hand corner of this article.

Thérèse Mema Mapenzi presented Cardinal Nichols with a crucifix at the Global Summit to end Sexual Violence in Conflict at the ExCel London on 12 June 2014.

Thérèse works at the CAFOD-funded Justice and Peace Commission in Democratic Republic of Congo.