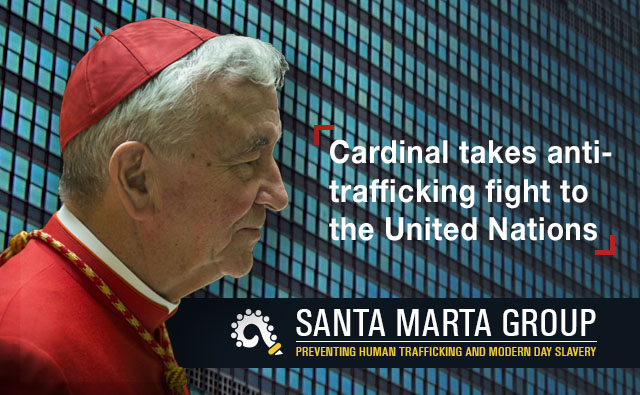 A global partnership of law enforcement agencies, Catholic Church organisations and experts from civil society – the Santa Marta Group – takes its fight against human trafficking and modern slavery to the United Nations Headquarters in New York on Thursday, 7 April 2016.

The Permanent Observer Mission of the Holy See to the UN and the Santa Marta Group is holding a special Side Event at the UN to galvanise the coordination necessary to implement Targets 5.2, 8.7 and 16.2 of the Sustainable Development Goals (SDGs).

These targets commit the United Nations and Member States to “eliminate all forms of violence against all women and girls in the public and private spheres, including trafficking and sexual and other types of exploitation,” “take immediate and effective measures to eradicate forced labor, end modern slavery and human trafficking,” and “end abuse, exploitation, trafficking and all forms of violence against and torture of children” by 2030.

“The 193 States that belong to the United Nations have a new moral imperative to combat human trafficking which is a real crime against humanity,” Pope Francis wrote in a letter in October 2015 to the Santa Marta Group.

Named after Pope’s Vatican residence, the Santa Marta Group was founded by Pope Francis in 2014. Its aim is to strengthen and coordinate the global response to combatting human trafficking and all forms of modern slavery.

The event will feature five panels:

Cardinal Vincent Nichols, President of the Catholic Bishops’ Conference of England and Wales, is part of a keynote panel that includes Commissioner Kevin Hyland, the UK’s first Independent Anti-Slavery Commissioner. The UN Secretary General and President of the General Assembly are also invited to take part.

Panel 4
Highlighting the responses and thoughts of Member States

The objectives of the high-level event are to convene decision-makers from proactive Member States, international organisations, the private sector, and faith and civil society groups to discuss enhanced and coordinated action to achieve Targets 5.2, 8.7 and 16.2, including:

To promote the commitment to end human trafficking, forced labor and modern slavery by 2030 through making it a central focus of multilateral, coordinated and integrated action;

To ensure there is clear leadership and strategic coordination provided by the UN system to support Member States to deliver on these targets;

To safeguard that these issues are tackled holistically as issues of human rights, labor rights, criminal justice, and development;

To show that action against them is smart development policy and secure engagement of major development actors;

To promote existing and new global partnerships and multi-stakeholder alliances and ensure their work is coordinated and complementary;

To share best practices amongst Member States and build partnerships between source, transit and destination countries;

To leverage support and engagement from the private sector, particularly around supply chain transparency.

The resurgence of slavery is one of the biggest tragedies and consequences of our modern globalised world. In 2012 the ILO estimated that there were 21 million victims of modern forms of slavery worldwide. In many places, the population has grown faster than the economy, leaving many people economically vulnerable.

Millions are migrating, moving from impoverished rural areas to cities, and from poorer countries to wealthier ones, in search of work or refuge. Criminals are able to deceive them by posing as legitimate labor recruiters. Human trafficking and modern slavery have a devastating impact on individual victims, who often suffer physical and emotional abuse, rape, threats against themselves and their families, and even murder. But they also have wider negative implications for human development, as it undermines the health, safety and security of every nation that it touches, but until the formulation of the 2030 Agenda a policy approach that locates the fight against them as part of a strategy to promote sustainable and long-term development has been crucially absent.

The SDGs have already generated renewed momentum to combat human trafficking and modern slavery: Pope Francis highlighted the fight against these evils during his 25 September 2015 address to the UN General Assembly and continues to bring global attention to what he calls “a crime against humanity” and “an open wound on the body of contemporary society;” in Dec. 2015 the UN Security Council held its first ever hearing on the issue; many Member States have taken major steps through legislation and actions plans and are pushing for more coordinated and integrated international action; a number of exciting new global partnerships in development have arisen, in addition to long-standing international initiatives. The time is now, therefore, to harness this momentum and ensure that it is well coordinated and complimentary.

You can download a PDF that explains a little more about the Santa Marta Group by clicking on the link below or to the right of this article.