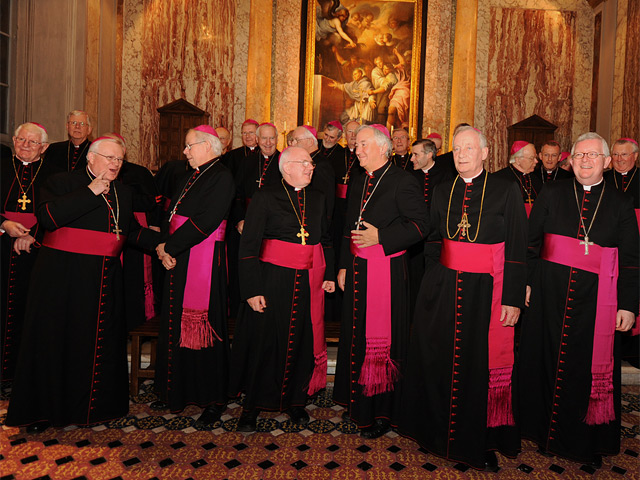 Bishops from England and Wales have called on all Catholics to be confident, faithful and courageous in playing a full part in building a better future for all in this country, especially during these difficult times of economic and social turbulence.

The call comes on the first anniversary of Pope Benedict XVI’s historic State Visit to the UK during which he helped many to recognise that “faith is not a problem to be solved, but a gift to be discovered afresh”. Polling undertaken immediately after the Pope’s visit showed that the majority of the country agreed that there is a place for God and religion in public life.

Reflecting on the Pope’s call for all to discover the definite service that God has called all of us to give, the Bishops have set out their priorities for the Church over the next five years. The Bishops state:

“Following the wonderful example Pope Benedict has given us, in our mission we must be gentle but also confident in manifesting the ‘beauty of holiness’… faithful in proclaiming the ‘splendour of truth’… courageous in testifying to ‘the joy and freedom born of a living relationship with Christ’.”

Following the re-establishment of Friday abstinence as a common act of witness and of solidarity with those who are in need or suffer and as an expression of our vocation to follow Christ who sacrificed his life for the good of all humanity, the Bishops called on all Catholics to witness publicly to their faith with renewed confidence and to assist in all of their activities to work together for the good of the community at large.

“On Home Mission Sunday, the anniversary of the Holy Father’s visit to our country, we renew our faith in the power of God to lead us through the difficult times faced by our nation and by our world. Confidently Catholic we look forward not anxiously or fearfully, but with renewed hope and courage. We invoke God’s blessing on our country and on our world.”

The anniversary of the State Visit of His Holiness Pope Benedict XVI to the UK is being marked by a Mass of Thanksgiving at Westminster Cathedral at 1500 on Sunday 18 September. The Mass will be attended by those who made a particular contribution to the organisation of the Visit. All of the Bishops of England & Wales, along with all seminarians, will attend remembering the historic meeting of the Holy Father with the Bishops and seminarians at St Mary’s College, Oscott, on 19 September, 2010. Her Majesty’s Government will be represented by officials headed by Simon Martin, the Director of Protocol for the Foreign and Commonwealth Office, accompanied by the Ambassador to the Holy See, Nigel Baker. The Archbishop of Canterbury and the Church of England will be represented by the Bishop of St Albans.