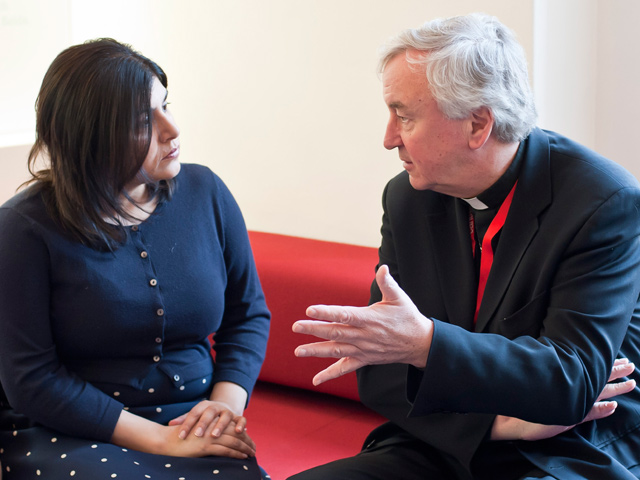 CBCEW » Justice and Peace » Religious Freedom » » Baroness Warsi to give lecture on &...

Baroness Sayeeda Warsi, the government’s Minister of State for Faith and Communities, will give the second Benedict XVI Lecture in central London on 2 December 2013.

Baroness Warsi, who met with Cardinal Jean-Louis Tauran, the President of the Vatican’s Pontifical Council for Interreligious Dialogue, when he visited the UK in June 2013, will speak on the topic of ‘Freedom of Religion in the Public and Private Sphere’.

The lecture, that will be held at the University of Notre Dame, is to be chaired by Archbishop Vincent Nichols and will be followed by a question and answer session.

Pope Emeritus Benedict XVI met the baroness at St Mary’s University College in Twickenham back in 2010 at the interreligious event as part of his historic state visit to the UK.

Baroness Warsi was appointed Senior Minister of State at the Foreign & Commonwealth Office and Minister for Faith and Communities at the Department for Communities and Local Government in September 2012. She was previously Chairman of the Conservative Party and Minister without Portfolio.

Her remit is to work with religious and community leaders to promote faith, religious tolerance and stronger communities within the UK.

She is a Conservative member of the House of Lords.

All are welcome but attendance is by registration only, please contact Katharina Smith-Müller by noon on 29 November 2013.

Katharina’s the Interreligious Adviser to the Catholic Bishops’ Conference of England and Wales.