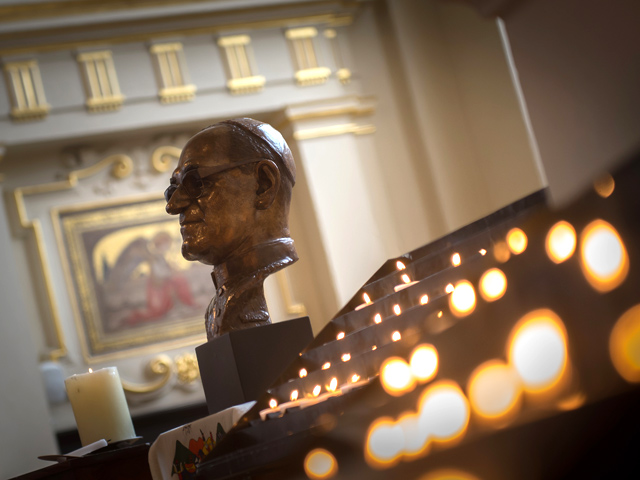 News from the Archdiocese of Southwark

Following a petition from the Archbishop of Southwark, the Most Revd Peter Smith, to have Blessed Oscar Romero added to the liturgical Calendar of the Diocese, the Congregation for Divine Worship and the Discipline of the Sacraments, by virtue of the faculties granted to it by Pope Francis, has granted that a ‘liturgical commemoration’ may be celebrated annually in St George’s Cathedral, Southwark on the 24 March – the anniversary of his martyrdom.

Although the Archdiocese did not meet the criteria for having Blessed Oscar Romero added to the diocesan calendar, it was recognised that ‘the Cathedral is home to a national shrine… and contains a number of his relics’ and therefore the request was granted for the Cathedral.

Archbishop Peter was very pleased to have received this permission, as was The Archbishop Romero Trust which encouraged and supported the application, believed to be the only such application granted outside Central America.

“I am delighted that the Holy See has approved this request, and hope that the example and prayers of Blessed Romero will prove a blessing to the diocese and to all who visit the Cathedral”.

On 3 February 2015 Archbishop Romero was formally declared a martyr, and beatified in San Salvador, El Salvador, on 23 May 2015. A four-metre 3D painted Salvadoran Cross, by Fernando Llort, known as the ‘Romero Cross’, and a memorial were installed in the Cathedral, and on the 19 September 2013 blessed during an ecumenical service. The cross contains a fragment of Archbishop Romero’s blood-stained alb and his zucchetto.

Bishop Patrick Lynch, auxiliary bishop in Southwark and titular bishop of Castro, at Archbishop Peter’s request, will celebrate the 12:30pm Mass in St George’s Cathedral on Friday 24 March 2017 in honour of the memory of Blessed Oscar Romero – the 37th anniversary of his assassination.

Bishop Lynch will be vested in a red chasuble originally made for the beatification ceremony and presented to the Cathedral by the Diocese of San Salvador; he will also use the new collect prayer for Blessed Oscar Romero.

The intention at the Mass will be to pray for the repose of the soul of Bishop Michael Evans, former bishop of East Anglia and for nearly 28 years priest of the diocese of Southwark, who had a great admiration and devotion for Oscar Romero, and was a founding trustee of the Archbishop Romero Trust.

The Metropolitan Cathedral Church of St George, Lambeth Road, Southwark, London SE1 6HR, usually referred to as ‘St George’s Cathedral, Southwark’, is the mother church of the Archdiocese of Southwark.

The Romero Shrine, on the south side of the Cathedral (the right side when approaching the Sanctuary from the main door), is located between the chapels of St Joseph and St Patrick. It contains the Romero Cross by Fernando Llort and a bust of Blessed Oscar Romero by the sculptor Lado Goudjabidze.

To have a Blessed inscribed in a diocesan calendar at least one of the following criteria needs to be fulfilled: