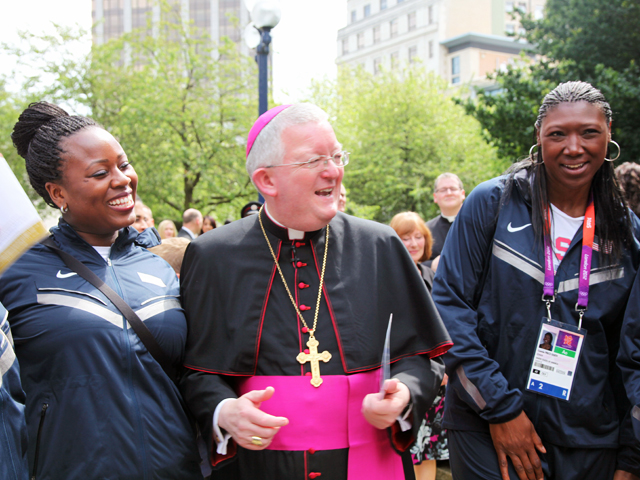 The Most Reverend Bernard Longley, Archbishop of Birmingham, was the guest preacher at a special Civic Service at Birmingham Cathedral on Saturday 21 July, to welcome the USA and Jamaican Olympic Track and Field Teams to Birmingham.

American and Jamaican athletes, coaches and support staff attended the hour-long service at St Philip’s Cathedral, situated in Birmingham city centre, on a sunny summer morning with less than a week to go before the Opening Ceremony of the London 2012 Olympic Games, on Friday, 27 July.

During his thought-provoking sermon, Archbishop Longley said: “The 1948 London Olympic Games held just after the Second World War came to be known as the Austerity Games.  In July 2005 when the United Kingdom won the bid to host the 2012 Summer Olympic Games the economic situation in this country seemed much better than it does today.  The economic situation here and in countries across the world is complex and challenging.

“In the United Kingdom we are concerned about the extent and the impact of unemployment, especially among young people.  Household budgets are under great pressure and millions of ordinary people are rightly worried about what the future holds for them and for their families.

“It is understandable that some will ask whether it is morally justifiable to spend so much public money on staging the 2012 London Olympics in a time of austerity.

“But the Olympic Games also offer an unique opportunity to raise awareness of global issues.  They encourage us to seek remedies for the inequalities and imbalances that create division and foster suspicion and resentment between nations.

“These international games can touch consciences and encourage a greater generosity, especially among the governments and multi-national companies and corporations of the Western World.  We can all do significantly more to be conscious of and to alleviate the needs of our global neighbours.”

Earlier in his sermon, Archbishop Longley said: “An unique occasion gathers us together at St Philip’s Cathedral today, such as most of us are never likely to see again.  The City of Birmingham wholeheartedly welcomes our distinguished guests from the Olympic Track and Field Teams of the United States of America and Jamaica.

“At the invitation of the Lord Mayor, and thanks to the hospitality of the Dean and Chapter of the Cathedral, our city’s civic and religious leaders are united in thanking our guests for their presence among us.  We are also united in thanking God for the extraordinary and uplifting display of peaceful human endeavour and co-operative as well as competitive achievement that the Olympic and Paralympic Games represent.

“In the coming days we shall indeed be surrounded by so great a crowd of witnesses – hundreds of competitors and millions of spectators witnessing to the God-given gifts that sportsmen and women develop and use so creatively and inspiringly during these forthcoming games.  Our particular prayer today is that this will inspire individuals and nations to pursue peace with everyone.”

The Archbishop of Birmingham then mentioned the annual Day for Life celebrated in parishes throughout the Catholic Church in England and Wales. He said: “On Sunday 29 July, two days after the Opening Ceremony, it is the custom within my own tradition to celebrate a Day for Life, recalling the precious gift of life that is ours to cherish from its very beginning until its natural end.  This year’s theme for the Day for Life is taken from the first letter that St Paul wrote to the members of the early Church at Corinth: Use your body for the glory of God.”

Archbishop Longley emphasised: “Whatever contributes to the genuine good of the human body contributes also to the spiritual and moral well-being of each person and therefore to the societies and countries where we live.  If we fail to respect the body we soon lose our sense of the dignity of human life.”

The Archbishop continued: “In our prayers today we cannot neglect a moment of remembrance for those who died or were injured in the tragic events yesterday in Denver, Colorado and for their grieving families and friends.  May they be strengthened and consoled at this awful time.”

Archbishop Longley said: “Like the Olympic tradition, the Christian faith has a long record of celebrating the extraordinary gift that is the human body.  We believe that the Son of God became incarnate, embodied in Jesus Christ, the Word made flesh.  The God-given gift of the human body is celebrated and recognised through the values that underpin the different faith communities of this city.

“The faith leaders of the Jewish, Muslim, Sikh, Hindu, Buddhist and Christian communities across Birmingham strive to work together and in partnership with our civic leaders for the common good.”

Archbishop Longley stressed: “The Olympic and Paralympic Games promote the common good and they have already had an enormous and beneficial impact within our local communities.